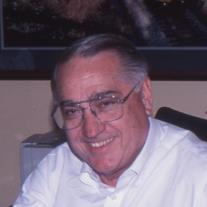 Willis F. Kilpatrick, lovingly known as “Darby” to his family passed away June 12th 2015 at the age of 74 in Overland Park, Kansas. His memorial service will be held 4:00 p.m., Tuesday, June 23rd at St. Michael and All Angels Episcopal Church, 6630 Nall Avenue in Mission, Kansas.
In lieu of flowers, family suggest memorial contributions to be made to the American Heart Association.
Willis was born September 10, 1940 in Corona, New Mexico to Henry and Lattie Kilpatrick. He graduated from high school in Vaughn, NM in 1958. He married Carol Allyn Bonnell on December 27, 1962. After serving in the U.S. Army for 3 years in Huntsville, AL, he received his B.B.A. in 1967 from Eastern New Mexico University and then went on to receive his M.B.A. from E.N.M.U. in 1970.
He began working for the Atchison, Topeka and Santa Fe Railway in Topeka, Kansas in June of 1970.
He and his family lived in various cities throughout his railroad career, and were transferred to Kansas City in the fall of 1991. He began working for the Kansas City Southern Railroad on January 1, 1996 and retired April 1, 2013.  His most recent title was Director of Heritage Relations. While at the KCS, he was responsible for the Holiday Express Train. He was also an author of a railroad book titled, "Streamlined Hospitality, The Tradition Lives On".
Most recently he and his wife, Carol, enjoyed getting away to their beautiful place on the Lower Dells of the Wisconsin River.
He loved sharing his ancestry, and was particularly proud of his Irish and Native American Indian lineage, but most importantly he loved his family and was devoted to them.
He is survived by his wife Carol; two children, Shanna C. Berning and husband, Christopher, and James F. Kilpatrick and wife, Debra; four grandchildren: Jackson Berning, Ashlyn Berning, Joshua Kilpatrick and Kelly Kilpatrick; two sisters, Brenda Zumwalt and Jacqueline Kilpatrick. Please visit www.overlandparkchapel.com to leave online condolences.

To order memorial trees or send flowers to the family in memory of Willis Kilpatrick, please visit our flower store.