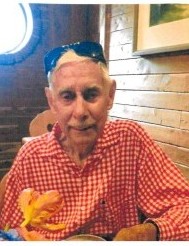 In 1936 he moved with his family from Kansas City to Redings Mill near Joplin, Missouri. There Bill attended North Junior High School and graduated from Joplin High School in 1944.  In that same year Bill returned with his parents and sister Marjorie to the Kansas City area where his parents purchased a home in Fairway, Kansas and Bill eventually became the longest continuous resident.

Bill served in the Army in Europe after World War II where he had many adventures including an accidental audience with the Pope and striking up a friendship and having his portrait drawn by then street artist Nicola Simbari, who became a world famous Italian painter.

After being honorably discharged from the Army, Bill attended the University of Kansas, earning a Bachelor of Science degree in Business and where he was an active member of Acacia social fraternity.

After college, Bill worked for the Skelly Oil Company for seven years and subsequently as a life insurance agent with Mass Mutual from whom he eventually retired.

In his active years, Bill could often be found at the Homestead Country Club where he became a charter member in 1953. He was a caller with the Guys and Dolls Square Dance Club. Bill loved to garden and play with his dog.  He was also a devoted member of Village Presbyterian Church.

As a child, he had the opportunity to travel extensively and continued to do so in his adult life.  He especially loved to spend time in Mexico and once said he had visited Acapulco thirty-seven times.

In his late life, Bill reveled his friends with his many stories, enjoyed attending the music programs at his church, and could be seen driving his Volkswagen to late dinners at Village Inn and to his cherished Friday lunches at Andres with his dear friend Tao.

Bill was predeceased by his parents and sister, Marjorie.  He is survived by several cousins and dear neighbors and friends.

Visitation will be held from 1 to 2 pm Monday, December 9, 2019 at the Village Presbyterian Church with the Funeral Service being  held at 2:00 pm.

To order memorial trees or send flowers to the family in memory of William "Bill" Love Jr., please visit our flower store.