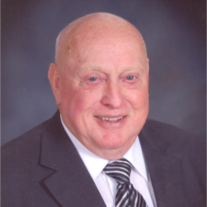 William S. Hurst, OD, 81, passed away March 20, 2016.  He was preceded in death by his brother Bob Hurst.  He is survived by his wife of 52 years, Barbara, his daughter Rebecca, son Christopher and his wife Christina, 2 grandsons Hayden and Declan, his sister Joanne Rodgers and a brother Philip and his wife Marilyn, and several nieces and nephews.  William was born and raised in Oklahoma.  He served in the Navy medical corps during the Korean War.  He graduated from Southern College of Optometry in Memphis.  He practiced in Sabetha, KS, where he was on the Sabetha school board and served as Chamber of Commerce president.  After moving to Overland Park, he practiced in Mission, KS, was a member of the Mission Optimist Club, and was active in Boy Scouts as a troop leader and district commissioner.  In later years he enjoyed gardening and woodworking.

To order memorial trees or send flowers to the family in memory of William Hurst, please visit our flower store.