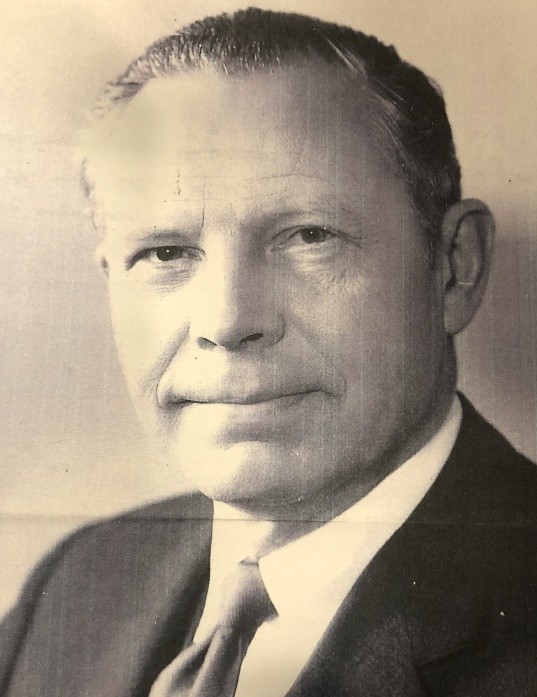 Bill Grant passed away on Thursday, February 13, 2020, three days after his 103rd birthday.

Believing that America would soon be involved in World War II, he was one of the first to enlist in the Navy Officer program. He received his Ensign commission in 1940 and, in June 1941, married Mary Noel of Lee’s Summit, MO. Bill and Mary moved to Key West, Florida, where Bill reported for active duty on a destroyer in July, 1941. He was later transferred to Naval Aviation, served as a Navy blimp pilot, Atlantic Fleet, and retired as a Lt. Commander.  Bill was one of the last surviving members of the Lighter than Air Fleet from World War II.

Returning to Kansas City in 1945, Bill joined the company his father had founded in 1909, Business Men’s Assurance Company of America (BMA). He was assigned the task of starting a new division of the company, life reinsurance, which became one of the largest commercial life reinsurance businesses in the United States. In 1960, he became the President and Chief Executive Officer (CEO) of BMA. In 1972 he served as Chairman of the American Life Convention and was closely involved with the American Council of Life Insurance (ACLI). The ACLI today is the principal lobbying organization for the life insurance industry composed of CEOs from life insurance companies around the United States.

Other business activities have included membership on many boards – LabOne, Boatman’s First National Bank, BMA, Generali Life Insurance Company of Trieste, Italy, Kansas City Power and Light, Union Pacific Corporation, and the American College of Life Underwriters in Philadelphia. He was an underwriting member of Lloyd’s of London and participated through his own private company, which he appropriately named Jayhawk Underwriting Ltd. Other business pursuits included establishing a subsidiary of the BMA Company in Australia, one of the first American life insurance companies in that country. It was at that time, that he learned about plentiful land in western Australia where he purchased a large sheep ranch.

Bill loved Hawaii and established one of the larger life insurance agencies in Hawaii.  The manager of the BMA Agency introduced Bill to a real estate developer who collaborated with BMA to build the Hyatt Regency in Kaanapali Beach on Maui. The Hyatt on Maui was the first of its kind for beach resort hotels in the world centered around its spectacular large pool with waterfalls.

Bill was always interested in television and obtained the rights for BMA to obtain the UHF franchise for a new television station, Channel 41, called KBMA in Kansas City which went on the air in 1970. He also started KTXL another UHF TV station in Sacramento, California, which developed the largest market share of any UHF station in the United States. He was also one of the early investors in cable television in Kansas City.

Bill was an avid golfer and loved to play golf and, of course, conduct a little business on the golf course. He was a huge fan of Tom Watson and whenever Tom was playing in tournaments, Bill would be closely watching on TV. In his later years he loved to play golf in San Diego with a close friend of his and they would hit the links regularly for nine holes when both were in their 90’s.

Bill loved football and would go to the KU-MU football games in Columbia or Lawrence. When the Chiefs moved to Kansas City in 1963 and were trying to establish a fan base, Bill was so impressed with Lamar Hunt when he called on him that he set up a program in 1964 for BMA employees to purchase season tickets at half the cost, sharing the other half of the cost with BMA.

In 1970, Bill served on President Nixon’s Commission on Financial Structure & Regulation, and the same year served on the National Board of the American Field Service in New York. In that connection, he was proud to have his family host in their home for one year, a student from Switzerland. That student was Olivier Jacot-Guillarmod, who later became the youngest person to ever be appointed a justice on the Swiss Federal Tribunal.

Bill’s civic contributions included chairing the Heart of America United Campaign, chairman and president of the Heart of America Council of Boy Scouts, member of the Nelson Museum Board of Governors, University of Kansas Endowment Association board and the board chairman of the UMKC Conservatory of Music.

In 1998, the Grant family established a professorship in jazz studies at the Conservatory. Bill was responsible for bringing Bobby Watson, a noted jazz musician to the Conservatory to head the department.

Fostering an interest in health research, Bill had served on the Advisory Council of the Memorial Sloan-Kettering Cancer Center in New York where he was involved financially in helping Ph.D. candidates doing HIV research. He was founder of the Life and Health Insurance Medical Research Fund and raised money, which he presented personally to President Ronald Reagan at a meeting in Washington D.C. He served on the board of the Burnham Institute of Medical Research in La Jolla, California, which was prominent in bone marrow research.

Honors that came his way included the Kansas University Citation for Distinguished Service, Honorary Doctorate from Westminster College, where he gave the commencement speech in 1992.

The accomplishment of which Bill was always proud of was obtaining the land and building the BMA Tower, completed in 1963. The following year the building earned the First Honor Award of all new buildings in America by the American Institute of Architecture. The building still stands today overlooking Penn Valley Park.

He authored three books, Airship Rescue Operations, The Romantic Past of the Kansas City Region – 1540-1880, and a genealogy, From Kittery to Kansas. Because of his love of travel, his hobby was the study of the French language.  He attended classes, private lessons and a school in France in 2004 when he was 87.

Services will be held on February 27 at 4 p.m. at St. Andrews Church, Kansas City, MO.  In lieu of flowers, the family suggests a donation in Bill’s memory to the UMKC Conservatory of Music, 4949 Cherry, Kansas City Missouri, 64110 to the attention of Mark Mattison.

To order memorial trees or send flowers to the family in memory of William Grant, please visit our flower store.