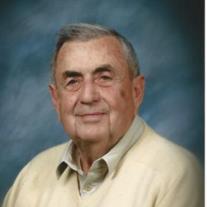 William Noel Brownfield
October 24, 1923-April 15, 2015
In his 91 years, Bill Brownfield never met a stranger. His reach in the community was far and wide. There was always time to listen and a delightful story to tell. The accomplishments were many including his position as Mayor of Leawood and President of Leawood National Bank. He was a true black and gold Missouri Tiger. He served his country in the U.S. Navy as a Lieutenant on the USS Mac Kenzie DDG14 where his ship guarded the Mediterranean Sea.  There were tales to tell with young men still teenagers and in their early twenties. He loved sporting his Mac Kenzie cap in the Fourth of July parades in Aspen.  Being with fellow veterans was always an emotional experience.
Bill and his wife, Ann just celebrated their 39th anniversary.  Between their combined families, they shared 5 children, 6 grandchildren and 2 great grandchildren. His daughter, Martha Baird (Jerry), his son, Will Brownfield (Ann), Ann’s daughter, Pamela Griffith (Mark), Ann’s sons, Peter and Patrick Laumeyer, his grandchildren-Emily Ptacek, Michael Ptacek (Cindy), Christy and Danny Brownfield, Jasmine Westphal (Schuyler), Hayley Griffith, and great-grandchildren, Quinton Westphal and Edith Ptacek. He loved each one and was so proud to be a husband, father, step father, grandpa/pop-pop, and great grandpa. He is preceded in death by his parents and daughter, Sally Brownfield.
Bill loved life and gained a grand spirit of adventure. At 50 years old, he received his pilot’s license.  His life with Ann took off for the airshows of Oshkosh, the mountains of Aspen, the ocean at Key West, and the valleys of Napa. Every adventure gave him the joy of life.
He leaves each one of us a legacy of genuine kindness, a spirit of discovery, and a determination to beat the odds. Bill will remain forever in the hearts of all he touched.
The family will receive friends to celebrate his life at 10:30am on May 19, 2015 at Colonial Church in Prairie Village, 7039 Mission Rd, Prairie Village, KS after the Private Committal Service.
Remembrance’s to Colonial Church.

To order memorial trees or send flowers to the family in memory of William Brownfield, please visit our flower store.