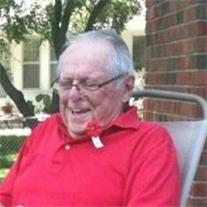 Waite was born February 7, 1925 in Cleveland, OH to Watt and Marie Welker. He graduated early from Washburn High School in 1943, when he was drafted into the U. S. Army June 15, 1943 and was honorably discharged Feb. 2, 1946 in the rank of staff sergeant and then attended the University of Minnesota. Waite married Ginny Lundquist on Dec. 19, 1947. He retired from Westinghouse Electric Corporation, Lamp Division, as District Manager. Waite was a Marshall for Overland Park Golf Course, including assisting with the junior golf tournaments. He was an avid gardener and loved dogs. Waite was preceded in death by his wife, Ginny and his grandson, Zach Willis. Survivors include his three children: Stephanie Willis, Whit Welker, and Tootie Welker; granddaughter Kate See (Matt); great grandchildren Reese Willis and Kane See.
To order memorial trees or send flowers to the family in memory of Mr. W. Welker, please visit our flower store.