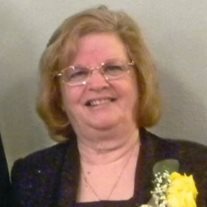 Vivian Lee Turner, age 68, of Kansas City, KS passed away on September 23, 2014 at Shawnee Mission Medical Center due to complications with heart surgery. Visitation will be held from 6 to 8 pm on Thursday, September 25, 2014 at the Overland Park Chapel. Funeral Services will be held at 10 am on Friday, September 26, 2014 also at the chapel. Interment will follow in Chapel Hill Memorial Gardens, Kansas City, KS.
Vivian was born on April 7, 1946 in Kansas City, KS. She was a wife, daughter, sister, aunt, grandma and great grandma. Vivian married William L. Turner, Jr. on January 23, 1964. They recently celebrated their 50th anniversary. She worked at K-Mart for 25 years, retiring in 2009, and was involved in church ministry for most of her life. For the past 6 years she was a member of Abundant Harvest Church in Kansas City, KS.
Vivian is preceded in death by her father H.C. Jacoby, her mother-in-law Dorothy O. Turner, her sister-in-law Judy A. Weber and brother-in-law Wallace Weber.
Survivors include her husband, William L. Turner, Jr. of the home, son Daniel H. Turner of Kansas City, MO, daughter Janice S. Murkin (Chris) of Belton, MO, as well as 4 grandsons, 3 granddaughter-in-laws, and 2 great grandchildren.

To order memorial trees or send flowers to the family in memory of Mrs. Vivian Turner, please visit our flower store.