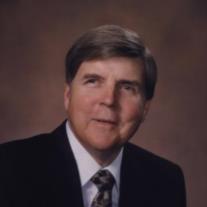 Thomas M. Scott of Mission Hills, Kansas, died at his home on August 31 at the age of 79.  He was born March 28, 1936, in Jackson County, Missouri. On August 16, 1958, he married the love of his life, Betty C. Scott in Kansas City, Missouri. After graduation from the University of Missouri-Columbia, he spent more than 40 years as a leader in the commercial insurance industry. He grew his company, Insurance Management Corporation of Kansas City, to a nationally respected insurance and risk management firm. In 1995, Tom led his company and its subsidiaries through its merger with Arthur J. Gallagher & Company, the sixth largest insurance broker in the world.

Since his retirement in 1997, Tom had spearheaded numerous community and philanthropic activities. In the Kansas City community he has served in leadership positions for the American Royal Association, the United Way, Saint Luke’s Hospital Foundation, the Midwest Diabetes Coalition, the Kansas City Symphony, the Junior Chamber of Commerce, Junior Achievement, and Ozanam Home for Boys. He and his wife, Betty, were benefactors of a new outpatient dialysis center at Saint Luke's Hospital, the Kauffman Center for the Performing Arts, and the Scott Pavilion at the American Royal fairgrounds. In 2013, Tom and Betty were
awarded Philanthropists of the Year through Non-Profit Connect. In 2015, he and Betty were honored with the American Royal Lifetime Achievement Award. They also have been strong supporters of Wayside Waifs-Kansas City. Tom was an Ellis Foundation board member and past president of Saddle & Sirloin.

Tom always sought to find the good in every person and situation. One of his favorite precepts was, “Do more than anyone expects.” Everyone who knew him can attest that Tom was a living exemplar of this guidance.

Tom was a long-time member of Village Presbyterian Church and a memorial service will be held there, at 6641 Mission Road, Prairie Village, Kansas, on Thursday, September 3 at 2 p.m. followed by a Celebration of Life reception at 3 p.m. at Indian Hills Country Club, 6847 Tomahawk Road, Mission Hills, Kansas. In lieu of flowers, memorial contributions may be to the Scott Family Memorial Scholarship, Attn: Chris Ellis, Ellis Foundation, PO Box 54, Fort Scott, Kansas, 66701, or to the Village Presbyterian Church, 6641 Mission Road, Prairie Village, Kansas, 66208.
To order memorial trees or send flowers to the family in memory of Thomas Scott, please visit our flower store.