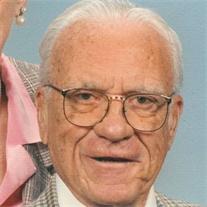 Thomas J. Manning, 92, passed away February 11, 2014, at Aberdeen Village in Olathe, KS. A celebration of his life will be held Saturday, February 22, at 11:00 am at Community Christian Church, 4601 Main, K.C. MO., with a luncheon immediately following.
He leaves behind his loving wife of 61 years, Ivy, sons Tom (Susan) of Lenexa and David (Reta) of Manhattan, 3 grandsons (T.J, Christopher, and Joshua), sister Helen Anderson (Chuck), and 17 nieces and nephews. He is predeceased by an older brother, Raymond, and a younger sister, Mary Ferguson.
A native of Kansas City, he attended Northeast High School and then K.U. where he achieved a degree in Mechanical Engineering with an Aeronautical Option, graduating in 1942. He served in the U.S. Navy in World War II, and in the Navy Reserve for 18 years. He served 3 terms as Kansas State President of the Navy League, and did duty with the Civil Air Patrol at New Century Airport in Olathe Kansas. Tom was licensed as a private pilot in 1942, and flew his own airplane for business and pleasure for over 50 years.
He joined Community Christian Church in 1952, where he met Ivanelle Garthwaite ("Ivy"), and they married there on November 25 of that year. During his 62 years of membership he served the church in numerous leadership positions and work with the Youth Group.
Tom's father died when he was only 7 years old, leaving a widow to raise four children during the depths of the Great Depression. In those days the Salvation Army had a "Penny Ice" program that allowed those of limited means to afford ice for their ice box. He never forgot that kindness, and became very active with the organization as a bell ringer, a member of the Salvation Army Advisory Board in 1965, and a Life Member in 1990. He is a recipient of the Booth Award.
He started his own company, T.J. Manning and Associates, a manufacturer's representative firm selling mechanical and heat transfer equipment, and retired in 1990 after 40 years.
He will be dearly missed by family and friends, who will always remember him for taking a deep personal interest in them, their careers or education, their aspirations. He and Ivy were usually there for the important milestones in their lives. Many nieces and nephews remember him teaching them to swim, taking them to a Royals game, or letting them "fly" his plane, many decades after.
Contributions in Tom's honor may be made to the Salvation Army of Kansas and Western Missouri, http://salarmymokan.org/ or for those cannot give a monetary donation, give in Tom's spirit and sign up to ring the Salvation Army bell in your area, http://www.registertoring.com/WebPages/Default.aspx. Fond memories and condolences for the family may be left at www.overlandparkchapel.com (Arrangements by D.W. Newcomer's Sons Overland Park Chapel, 8201 Metcalf Ave., Overland Park, KS 66204, 913-648-6224)
To order memorial trees or send flowers to the family in memory of Mr. Thomas Manning, Sr., please visit our flower store.