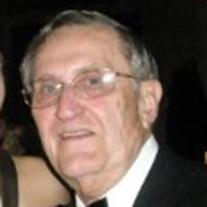 Robert Ennis (Bob) Gunter, 80, of Prairie Village, KS passed away peacefully at St. Luke’s Hospice House in Kansas City on Friday, January 9, 2015 after a brief illness.
He was born October 4, 1934 in Kansas City, MO., the eldest of two children to Robert E Gunter Sr & Mildred Helen (Morgan) Gunter.  He is preceded in death by his cherished wife of 40 years, Eva Carolyn (Kiehl) Gunter and his parents.  He is survived by his loving and devoted companion over the past 14 years, AJ LoScalzo, a sister, Mary Zoe and Mac Proffitt of Richmond, MO, brother-in-law Richard (Dick) Kiehl & Beverly of San Carlos, CA, children: Michael Gunter (Jenny), Eve Brown (Chuck) and Mark Gunter (Traci). He also leaves behind six grandkids that adored him (Tara, Elise, Lauren, David, Megan and Maci), a sweet great grandson (Isaac), and many other great nieces, nephews and others who were family in every sense of the word.   Bob graduated from Westport High School in 1952 where he played basketball and football.  He then went on to graduate from Central Missouri State University in Warrensburg (UCM) where he played basketball and taught mathematics. Bob worked for Business Men’s Assurance (BMA) for 30 years, retiring at 52 as a Senior Vice President.  He loved to travel and participate in meaningful activities and traditions with family and friends.  Bob volunteered at Gordon Parks Charter School and Second Presbyterian Church.  His strength and courage of conviction will be missed by all who knew him – he was extremely likable and kind, a really, really good man.  Visitation will be held Wednesday, January 14 from 5-7pm at Overland Park (KS) Funeral Chapel, 8201 Metcalf Avenue.  Funeral Service will be held at Second Presbyterian Church, 55th& Oak, Kansas City, MO, on Thursday, January 15 at 10:30am, followed by Christian burial at Shawnee Mission Memorial Gardens, 23215 W 75th St, Shawnee, KS.Memorials may be made to the Carolyn Gunter Memorial Fund at Second Presbyterian Church or Gordon Parks Charter School, both in Kansas City, MO.The family wishes to thank the staff at St. Luke’s Hospital, particularly Dr. Rhee, & St. Luke’s Hospice House for their concerned care, kindness and compassion these past few weeks. Condolences may be expressed to the family via Overland Park Funeral Home, 8201 Metcalf, Overland Park, KS, 66204, or on line at www.overlandparkchapel.com

Good morning.
This will be difficult, but this feels like a pretty soft and forgiving room, perhaps the ultimate forgiving room, in case I stumble.
I am Robert Gunter, but I’m not the Robert Gunter we wish were here today.  The Robert Gunter who should have been fine today died on January 9, the same date Robert Gunter Sr passed, 21 years ago.  I’ll be asking my sister, who produces the family calendar, to make January 8 longer and maybe we’ll just skip Jan 9 and proceed straight to January 10 going forward, since January 9 sometimes doesn't turn out so well for the Robert Gunters of the world, apparently.  Just a suggestion…

The Pope wrapped up 2014 with a solemn prayer service in St Peters Basilica on New Year’s Eve, using his homily to stress life’s fleetingness.  Perhaps inspired by Katy Perry, he said “how we like to be surrounded by so many fireworks, seemingly beautiful, but which in reality only last a few minutes.” Then, borrowing from Kevin Bacon in Footloose (who knew the Pope was so well versed in pop culture?), or possibly Ecclesiastes, he continued with “there is a time to be born, a time to die, and a time to reflect on our mortality, the end of the path of life on Earth.”
That reference inspired me to look up the Book of Ecclesiastes 3:4.
“A time to weep, to laugh, to mourn, to dance”.
In this particular winter season, I find myself certainly weeping, but also laughing.  Yes mourning, but also dancing (my Mom & Dad actually got pretty good – they tried to teach Traci & I, but it didn’t take, yet).
“A time to love, to hate, a time for war, a time for peace”.
In this season I find myself loving, specifically family & friends & life’s many gifts, just like Dad did.
I find myself hating - specifically that awful bacteria he somehow picked up.  How random and sickening and insidious.
A time for war: I know my Dad was resigned that while there might be a time for war occasionally, he was always praying for our leaders to find a road toward a time for peace. Certainly Dad was at war with the disease that somehow attacked him.  And now, clearly, he is at peace, as the infection no longer can hurt him.
Truly a cruel thief, whatever he picked up was similar in some ways, but in others distinctly different from the nasty cancer that my Mom battled for so many years.  As Dad often said, “I’ve been very fortunate.  Only one truly awful thing has ever happened to me.”  Sadly, this episode was clearly a second.
I just love the simplicity of how Dad lived his life  – “do the right thing”. He made it look so easy.
To me my Dad was a sweet, moral man, and my best friend, one who would always, always help me, guide me, support me and love me.  Of course many of us felt that way – the best friend part.  Can you think of a time he didn’t come through? Ever?

He worked at BMA for 30 years, retiring at 52 as a senior vice president.  His office on 18 overlooked his boyhood neighborhood – how cool is that?!
He had a brilliant, beautiful mind.  As we all know, the left side of your brain is your analytical side, and your right side is your creative side. Dad had an ambidextrous brain, loaded with brilliance on both sides, as much as anyone I know.
You could see him battling the disease like a chess match, trying to find a solution.  He’d pull on the medical equipment attached to him, figuring out what the program was, what the purpose was. He’d listen to the doctors & nurses as they strategized and tried to puzzle it out, even if they didn’t realize he was sizing up the situation with them.
He had a great sense of humor, and a bit of a competitive streak.  Dad won the family pool tournament last year, and when I told him I wanted to take his title at the 2015 event he uttered the clearest phrase I can recall in the past few weeks: “fat chance”.  It just occurred to me that since he beat me that last game, he retired forever holding the table.  Well played, Padre.

Dad loved to travel (via automobile, of course).  He loved KC strips & tenderloins, golf (especially partnering with David), eggs over easy, and mixing iced tea with lemonade.  He liked the Chiefs & KU basketball (just had to throw that in there Traci), as well as good movies & jazz.  I think he liked to fish, but probably as importantly to him was spending the time with Chuck & Oscar.  He had an appreciation for the arts (the Symphony, the Nelson, the Rep) that grew over the years.
Dad was genuine, and not one to go with the crowd (unless the crowd was right).
While he liked to go out to eat (Sebastian’s, the lunch bunch, the summer holiday breakfast picnics for 50 years) he mostly loved eating at home (his home or Eve’s or Jennys or AJs).
Some say he liked a good scotch – I can’t confirm or deny that. But Mike & I did enjoy testing the whole rainbow array of Johnnie Walkers color spectrum with him. I think he also was partial to Dewars, and apparently something called Famous Grouse that I'll need to check out.

My Dad loved traditions & family holidays, the house that he & Mom built, and Johnson County as a great place to raise a family.  He was incredibly welcoming to his extended family, the spouses, the in laws, other special connections – all were welcome at his table, and in a very real and genuine way. He was so proud of all of us: Mike, Eve, Tara, Elise, Lauren, David, Megan, Maci, Isaac.  Whatever endeavor we chose to try, he supported, making each of us feel special & loved.

He was an awesome volunteer for Gordon Parks and Second Presbyterian, reflecting his strong belief in education, helping others and serving Christ.  He was very generous with his time, money and other resources.
I like that he liked the Liberty Memorial so much. He shared with me that he went by the old part of the Museum many many times as a boy, fascinated by the history. I share his respect for it – it’s a great symbol in so many ways, a tribute to those who came before us.

Dad was a brave guy.  A few examples: asking out Carolyn, the prettiest girl in her class.
Then facing her Dad, Fred, a pretty tough guy in his own right.
Then years later, bravely soldiering on after she passed away, eventually finding love again when he met AJ, his loving companion over the past 14 years.  He often spoke of how much he loved AJ, and how grateful he was for her.
And of course he was supremely brave during this last battle, always asking “what’s next?”, “what’s the program today?” “Why aren’t we getting anywhere?”  As the saying goes, God only gave us one direction, and that’s forward, and so I never saw pity, just determination & guts.

I sometimes try to be more like him, which clearly sets the bar pretty high.
But if you’re going to go there, you’d better bring you’re “A” game and then some.
In these last days I was assigned the task of paying some of his routine bills.  I would prepare the checks and he’d sign them.  As we got to the homes association dues invoice, he said “this looks off. What about the $4 deduction for paying on time?”  Clearly his mind was sharp to the end.
As was his sense of humor.  The hospital staff, which was excellent, constantly remarked how likable he was, and how much they were pulling for him.  That’s pretty cool when you can convey charm & charisma when you’re unable to speak & not feeling well.

I was drawn to 1st Corinthians 13, verse 4-7 these past days, often referenced at weddings.
I tried inserting “Dad” for “Love” throughout the passage: Dad was patient, Dad was kind.  He did not envy, did not boast, was not rude, self-seeking or easily angered (except in traffic).  Dad always protected, always trusted, he had high hopes for his family, friends, church & country. Dad always persevered, Dad never failed.
Put algebraically, in a way Dad might have understood, being a math guy in college, my formula might go like this: if “x” is love, and if “Dad” can be inserted for x and if the resulting statement still holds true, therefore Dad equals Love.  That’s called a proof, and the proof was his Life.

As John Kennedy said, referring to mankind’s commonality and the short time we have on this planet:  “we all breathe the same air, we all cherish our children’s future, and we are all mortal.”  Let us be good men & women, as my parents were, and make the most of the time we have.  There’s a wall hanging in my parents’ home that reads “these are the days that the Lord hath made; let us rejoice & be glad in them”, and grateful for them.
Let us seize this day to be kind and good and strong, as my father was.
Thank you so much for coming today and honoring this man and his remarkable life.


To order memorial trees or send flowers to the family in memory of Robert Gunter, please visit our flower store.