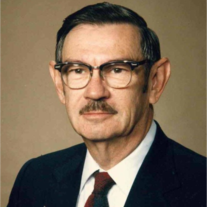 Robert (Bob) Arthur Ebel of Overland Park, Kansas passed away peacefully in his sleep from natural causes early Saturday morning August 19th, 2017 at his Bickford apartment in Mission, Kansas. At the age of 92, Robert had lived in the Kansas City area since 1952 and at Bickford Senior Living since 2005. He was born in Hillsboro Kansas on June 22nd, 1925, and graduated from Hillsboro High School in 1943. Shortly after high-school, he was drafted into the U.S. Army Air Force and served in Brazil as an electronics radio technician during WWII. He was responsible for maintaining the aerial navigation radios that guided military transport planes across the Atlantic into North Africa. After his honorable discharge at the age of 22, he started his first business in 1947, “Ebel Radio Service” in Hillsboro, KS. By late 1948 he was working to further his technical education by attending Central Radio and Television School in Kansas City, MO. In 1950 after graduation he was hired as a broadcast engineer and announcer for a small AM radio station in Woodward, Oklahoma. By 1952 in pursuit of better opportunities, he came to Kansas City to work in the electronics service department for Jenkins Music Co. downtown. Then, in 1953 he was offered a new position and became a broadcast engineer with KCMO Radio in Kansas City, MO and was part of the team of broadcast engineers who first transmitted a stereo signal to KCMO listeners. During his time with KCMO he married Carol Jean Eulinger of Maysville, MO on Oct. 28th, 1953. Their only child Keith was born in late 1954. By mid-1956 he again entered into business for himself in the radio and television field, and remained self-employed for the rest of his life. By 1980 he was the first to promote and install home satellite systems in the greater Kansas City area. Robert’s business was featured in an article by the K.C. Star, and had such notable clients as Ewing Kauffman, Clara Stover, and Ed King III. He was a lifetime member of the American Legion and the Veterans of Foreign Wars. Mr. Ebel and his wife Carol were also life-long members of Trinity Lutheran Church in Mission, KS. Robert served his church through numerous committees, ushers, and leader of the Trinity Seniors Group through 2004. He loved his country, and was proud to be a Kansan. He was honored to serve as the organizer and guide for many Trinity senior trips in and around the Kansas City area helping to promote civic pride as well as the history of our great Midwest. Bob was also an avid fisherman / sportsman, and happiest when floating lazily in his bass-tracker on a Lake, and enjoyed many memorable fishing trips with his numerous fishing buddies from Trinity Lutheran. Robert also had a great love of classical music instilled in him from a young age and had a very large collection of records and rare recordings, citing every detail of every recording by memory. His grandchildren always asked him why his music didn’t have any words.
Robert’s legacy and faith lives on through his son and daughter-in-law Keith and Susan Ebel of Lenexa, KS, his grandson Jared Robert (JR) Ebel and his wife Susan of Parkville, MO, and his granddaughter Katrina Diane Hutchins and her husband Michael of Overland Park, KS. He is also survived by his five great-grandchildren Jacqueline, Seth, Scarlett, Lydia, and Dylan. He was preceded in death by his wife of over 52 years Carol Ebel, his mother and father Louise and Arthur (Art) Ebel of Hillsboro, KS, and his beloved younger brother Karl Ebel of Estes Park, CO.
A Memorial Service will be held at Trinity Lutheran Church, 5601 W. 62nd St., Mission, KS 66202 on Thursday August 24th, 2017. Visitation will be from 10-11AM, Memorial Service from 11-Noon. Trinity Lutheran will host a short luncheon after the service. A short graveside service for those who wish to attend will be at Shawnee Mission Memory Gardens, 23215 W. 75th St., Shawnee, KS 66227 at 1:30PM. All friends and family are welcomed to attend.
It was Robert’s wish that any memorial gifts in his name be given to the ministries of Trinity Lutheran Church, www.tlcms.org or Metro Lutheran Ministry, www.mlmkc.org . Matthew 25:21 - His lord said unto him, Well done, thou good and faithful servant: thou hast been faithful over a few things, I will make thee ruler over many things: enter thou into the joy of thy lord.
To order memorial trees or send flowers to the family in memory of Robert Ebel, please visit our flower store.