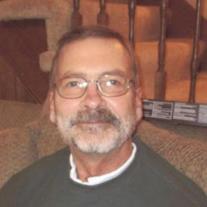 Loving son, brother, and uncle, Richard B. "Ric" Kadel passed away in his Olathe home on December 7 at the age of 61. Born January 2, 1953 to Jack and Marie Kadel of Mission, KS. Ric attended St. Pius, Bishop Miege, and graduated from SM North.  With a degree in HVAC from JCCC, Ric was a Journeyman for the Pipe Fitters Union and spent most of his career with AB May and O’Dell.  Avoiding working out in the cold was Ric’s retirement goals but he was still working. Just like his father, Ric loved building a place of his own.  When he wasn’t holding a tool he was holding a book.  Ric was an avid reader especially books on religion, politics and DIY projects.  Keeping things light and humorous, he enjoyed engaging in conversations about these topics with people of different opinions or ideas.  Throughout his life, Ric had a passion for music; playing the drums and guitars with several bands.  At family functions, it wouldn’t be uncommon for Ric to pick up a guitar and start playing.

Ric is survived by his mother, Marie Kadel of Mission; his sister, Karen Hanson of Overland Park; his nieces, Jennifer Yelton of Olathe and Elizabeth Martinez of Lenexa, with eight grand nephews and nieces.  He will be joining his father, Jack and brother, Scott Kadel both of Mission, KS, in heaven.

The visitation will be 5 to 8 pm, Thursday, December 11 and the funeral service, Friday, December 12th at 10 am.  Both opportunities for condolences are at Overland Park Chapel 8201 Metcalf Avenue, Overland Park, KS. In lieu of flowers, please send donations to KCPT Public TV in his name.


To order memorial trees or send flowers to the family in memory of Richard B. Kadel, please visit our flower store.