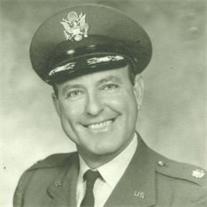 Lloyd P. Pope, 89, of Overland Park, Kansas passed away peacefully and with dignity at his residence 09 March 2014. He was surrounded by his family at his final flight into glory. Lloyd was born in New Orleans, Louisiana on 18 February 1925 to Robert F. Pope, Sr. and Fannie Lee Bridges. He was preceded in death by his father from an automobile accident in 1940 leaving his mother and aunt, Katherine Bridges, to raise Lloyd and his older brother Robert, Jr. Lloyd graduated from Warren Easton High School in New Orleans and attended Louisiana College in Pineville, Louisiana prior to volunteering for the service. Lloyd had two great loves in his life, the first being his wife of nearly 63 years, Eula Mae Pope and the second being flying. Lloyd honourably served his country enlisting in the United States Army Air Corps in 1943 serving as a pilot during World War II and the Korean War. In 1953, Lloyd transitioned to the Air Force Reserves where he continued to serve with the 442nd wing stationed at Richards-Gebaur Air Base until 1964 when he retired as a Lieutenant Colonel and a Wing Commander. Upon his transition to the Reserves in 1953, Lloyd joined Trans World Airlines, relocating to the Kansas City area, as a pilot where he continued to pursue his passion of flying until his retirement in 1985. Lloyd served not only as a line pilot for TWA, but for many years as an instructor in the training department in Kansas City where he became friends with every pilot he encountered. In the last part of his career, his seniority allowed him to have his beloved wife Eula Mae accompany him on many flights to locations across the globe. His expertise also lead to his being requested to help train pilots of other airlines with duty postings in Greece and Saudi Arabia.

Lloyd had a passion for life resulting from having lived a childhood during the depression that some may consider hard. Nevertheless, Lloyd always felt very blessed and fortunate. He loved his job and often said how lucky he was to get paid to fly for the Air Force and TWA because had they not paid him, he would have been forced to pay his own way to get to enjoy his time flying. He loved to laugh, sing off-key, play practical jokes and buy gag gifts for those he held close. He was a friend to everyone he met and was always willing to lend a helping hand. Lloyd had a passion and vision to be the ultimate 'do-it-your-selfer' as he felt that he could fix or repair most anything. More often than not he was right and when he wasn't he would try till there was no hope, replace the item and laugh about the experience. Most importantly though, he fixed lives always thinking of and helping others while never asking for anything in return.

Lloyd and Eula Mae were married in New Orleans, Louisiana on 18 August 1951 and they walked through life hand-in hand until his passing. Lloyd honoured his Lord as a faithful member of Prairie Baptist Church in Prairie Village, Kansas and later Countryside Christian Church in Mission, Kansas. He reaffirmed his feeling of being blessed by God having lived a life feeling he was never too poor to give to others. Lloyd gave back to his community serving as a Boy Scout leader with Troop 397, a member of the Abdallah Shrine Jokers, a member of Oak Park Masonic Lodge 864 and a long time supporter of City Union Mission as will as other organizations and charities.

Lloyd is survived by his wife Eula Mae, his sons Dr. Rick and Dr. Ron, their spouses Barbara and Shawna, and his grandchildren Christopher, Robert John, Harley and Jett. He additionally leaves many friends, colleagues and acquaintances.