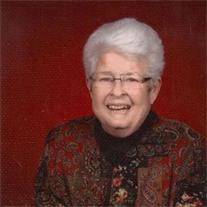 Peg was born June 27th 1933 to Charles "Brick" and
Ruth Gibson In Wakeeney, Kansas. She graduated
from Fort Hays Teachers College in 1959. In 1960
she married Richard Lowell, living in Dodge City, Kansas,
Kansas City, Missouri, Tulsa Oklahoma, Oklahoma City,
Oklahoma and Minneapolis, Minnesota two sons were
born to this union, Jeff Lowell Oklahoma City, Oklahoma
and Curtis Lowell (passed away 1996). Richard Lowell passed away
in 1994 and Peg Moved to Okarche, Oklahoma. In 1996
Peg reunited with her Wakeeney, Kansas, High School
Sweetheart, Ed Newcomer and they were married in
October of 1996.