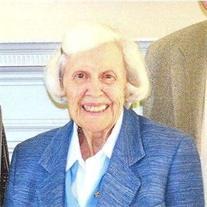 Patricia Zimmer Thompson, 87, passed away Saturday, March 9, 2013, after a brief illness. A memorial service will be held at 2:00 p.m. on Thursday, March 14th, at St. Paul's Episcopal Church, 11 E. 40th Street, Kansas City, MO. There will be a private interment at Forest Hills Cemetery.

Pat was born on December 30, 1925, in Tampa, Florida, to Albert William and Helen Curran Zimmer. Pat ("Trish" as her childhood friends called her) was a graduate of Sunset Hill School. She majored in History at Vassar College. Thereafter she received a Master's Degree in economics from Stanford University. She returned home to work at the Federal Reserve Bank where she co-authored "The Economic Base of Greater Kansas City."

In 1949, Pat married Robert Smock Thompson of Kansas City. He predeceased her. She is survived by three daughters, Carol Ellis Thompson of Washington, D.C.; Margo Thompson of Saratoga Springs, N.Y.; and Anne Curran Thompson of White Sulphur Springs, West Virginia. She leaves her brothers, Hugh J. Zimmer of Kansas City, MO, and Albert W. Zimmer, III, of Fairway, KS. She was the proud grandmother of Christopher, Celia, Alexandra and David.

Throughout her life, Pat continued post-doctoral studies in French Renaissance History at Stanford, and abroad in France and Russia. She was a recognized, published authority on the life and influence of Diane de Poitiers and 16th century French history.

Pat was an understated person who greatly contributed to the lives of others throughout her life. She was a member of the Junior League of Kansas City, where she was a tireless chair and co-chair of many committees. She was a docent at the Nelson-Atkins Museum of Art and loved giving tours of the Native American galleries. Pat spent many summers at Gull Lake near Brainerd, Minnesota, where she enjoyed fishing and relaxing with her family. She was a member of The Kansas City Country Club and of The River Club.