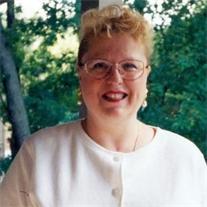 Patricia Renn-Scanlan, 62, of Topeka, KS, passed away on December 27, 2013, after an extended illness. She was born Patricia Ann Renn on July 16, 1951 in Sellersburg, Indiana. Patricia graduated in 1969 from of Our Lady of Grace High School in Beech Grove, Indiana and from Indiana University in 1973 with a B.A. in English and a minor in Zoology. Patricia received her Masters in Library Studies (M.L.S.) from Indiana University in 1977, and her Masters of Arts (M.A.) in Medieval Studies from Arizona State University in 1981.
While at the University of Alabama, Patricia was the head of the Reference Department, the youngest librarian department head at the time.
Patricia joined Mabee Library at Washburn University as the Instruction Librarian in 1993. In 1995, after a traumatic medical incident, Patricia emerged from a six week coma unable to speak or walk. With dedicated doctors, support from the community, and her own rehabilitation efforts, Patricia returned to work at Washburn in 1997.
At Washburn, Patricia taught classes in research studies, skillfully and cheerfully assisted students and patrons at the reference desk, curated the University's collections in such diverse fields as Nursing and Art, and served on numerous University committees, including Faculty Senate. Patricia also served in many professional organizations, including the Kansas Library Association. For health reasons, Patricia retired from Washburn in 2008, and in 2009 Washburn honored Patricia with "Librarian Emeritus" status. A self-taught watercolorist, Patricia publicly showed her work in Madison Wisconsin, in 1987. In retirement, Patricia painted, volunteered at Most Pure Heart of Mary Parish, and spent time with her daughter and son-in-law.
In recent years, Patricia struggled with declining health, but still enjoyed spending time with her family and friends.
She is survived by her only child, Ambriel Renn-Scanlan, son-in-law, Doug Elmer, two grandchildren, Theodore ("Teddy") Patrick Elmer and Benjamin Alexander Elmer, her father Donald Renn, sister Deborah Renn, nieces Tabitha Renn, Kristin Thompson, Amber Thompson, brother Steven Renn, and step-brother Mark Wood. She joins her brother Donnie Renn and step-mother Darvel Renn.
Donations in Patricia's name may be made to beHead Strong Foundation, www.beheadstrong.org, or Catholic Charities of North East Kansas Hospice, www.catholiccharitiesks.org/hospice. Services are pending at Most Pure Heart of Mary Catholic Parish in Topeka, KS.
To order memorial trees or send flowers to the family in memory of Ms. Patricia Renn-Scanlan, please visit our flower store.