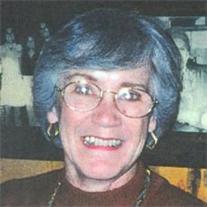 Patricia Mary Granger Ogren, 76, beloved wife and mother, died on August 17, 2013.
She was born on December 10, 1936 in Denver, CO to Ben and Eleanor Granger. She grew up in Mpls, MN and graduated from the Academy of Holy Angels in 1955. She attended the College of St Teresa in Winona, MN and graduated with a BS in Elementary Ed in 1959. Patty was married to her soul mate, Richard Ogren in Edina, MN July 15, 1961, and for 52 years they together raised four children. Her family was her life, and she will live in our hearts forever. Patty was a devoted wife, an incredible mother and a generous volunteer at Cure Of Ars Catholic Church, Catholic Charities and The Christian Foundation. Patty loved spending time with her family, traveling near and far with Dick, walking with her dear friends, playing bridge, golfing and PEO. She will be greatly missed by her family, her many friends and all who knew her. Patty is survived by her loving husband, Dick Ogren, her daughter Mary (Dale) Heider, Greenwood Village, CO, Matthew (Lisa) Ogren, Englewood, CO, Robert (Colleen) Ogren, Mission, KS, Timothy (Kendall) Ogren, Cary, NC, grandchildren: Alex, Andrew, Amy Heider, Jack and Luke Ogren, Terry, Megan, Rachel and Mark Ogren, Libby and Virginia Ogren, as well as sisters Eleanor Granger OSF, Rochester, MN, Carole Wrubel, Lanseboro, MN and brother Robert (Kathleen) Granger, Carefree, AZ. She is also survived by sisters-in-law Helene Ogren and Susan Granger. She was preceded in death by her parents Ben and Eleanor Granger and brother James Granger.
Her funeral Liturgy will be held at Cure Of Ars Catholic Church on Wednesday, August 21, 2013. A reception at 9:30 will be followed by Mass at 10:00. In lieu of flowers, please consider donations to Catholic Charities Of KC, KS, The Christian Foundation, KC, KS or Cure Of Ars Catholic Church, Leawood, KS.
Patty's family extends a special thank you to Brighton Gardens of Mission, KS for their loving care over the last 2 years.
To order memorial trees or send flowers to the family in memory of Mrs. Patricia Ogren, please visit our flower store.