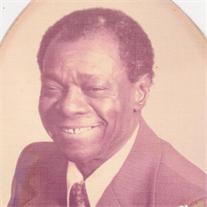 Nathaniel L. Adams, Sr. departed this earthly life and crossed over to Glory on Saturday afternoon, March 2, 2013. He was preceded in death by his loving wife of 69 years, Alfretta and both parents.
On October 25, 1921, Nathaniel was the 13th child of 14 children born to Moses A. Adams and Sally Sarah Ann Wilson of Chatham, Louisiana.
The family moved to Hope, Arkansas at his age of 6 months. He lost his mother at the age of 5 years old, they moved from place to place, first to Idabel, Oklahoma where he began school and joined church. Finally he moved to Kansas City, Kansas where he joined St. Peter C.M.E. Church and attended Summer High School. In high school he met and married Alfretta Quincel Baskins. To this union four sons were born.
His life had many golden memories, but none more cherished than: beginning his working career as a potato farmer with his father to a paper carrier with the Kansas City Star to finally Plant Manager for Holland Construction Company; serving his country in the U.S. Army during the Koran War; building his present home in South Park in 1947 with his own hands for his wife and children; attaining his 33rd degree, the last degree of Masonry for the Masonic Order South Gate Lodge 101 F.&A.M.; being a deacon and charted member of the Philadelphia Missionary Baptist Church, willing to let God use him where ever he might be needed.
He leaves to cherish his memory, four sons; Nathaniel, Jr./Wanda, Tony, Carlton/Mary and Scott (all in the Kansas City area); one sister, Viola Cox (San Diego, CA); brother & sister-in-law, Johnnie/Cleo Moore (LA, CA); one special niece, Linda/Donnell Copeland (KCK); one special daughter- in- law, Brenda Adams (KCK); four grandchildren, Troy/Carolyn Adams (KCK), Peter/LaToya Adams (Shawnee, KS), Va'Shaun Adams (Merriam, KS) and Neil Locke (Merriam, KS); five great grandchildren, one great, great grandson. A host of nieces, nephews, cousins, family and friends.
Masonic Rights/Visitation/Funeral will be held from 9:00am-10:00am/10:00am-11:00am/11:00am-1:00pm, Saturday, March 9, 2013 at the New Fellowship Baptist Church, 1235 Georgia, Kansas City, KS 66104.
Fond memories and condolences for the family may be left at www.overlandparkchapel.com
(Arrangements by D.W. Newcomer's Sons Overland Park Chapel, 8201 Metcalf Ave., Overland Park, KS 66204, 913-648-622
To order memorial trees or send flowers to the family in memory of Mr. Nathaniel Adams, Sr., please visit our flower store.