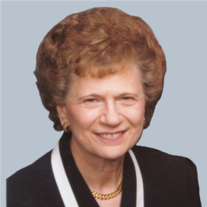 Mildred B. Parizek, wife of Dr. Eldon J. Parizek, passed away in Wichita, Kansas where she was being cared for at the home of her youngest daughter, Amy Law.   Mildred was born January 4, 1923 in Iowa City, Iowa, the daughter of Frank and Lulu Burger.  Mass of Christian Burial will be held Thursday, January 7, 2016 11:00 AM at the Church of the Holy Cross, 8311 W. 93rd Street, Overland Park, KS. Visitation and Rosary will occur one hour prior to the mass. Burial will be at Resurrection Cemetery in Lenexa, Kansas. In Mildred’s honor, memorial contributions may be made to the church.
Mildred was preceded in death by her parents and brother, Richard Burger of Iowa City, Iowa.  She is survived by her husband Eldon Parizek, one brother Warren and his wife Barbara Burger of Grand Rapids, Michigan, sister-in-law Shirley Burger of Iowa City, Iowa and sister-in-law Eunice O'Connor of La Crosse, Wisconsin.   Also surviving are four children, son Richard E. and wife Louise Parizek of Overland Park, KS, daughter Marianne and husband Tom Powell of Ypsilanti, MI, daughter Elizabeth and husband David Henson of Independence, MO, and daughter Amy and husband Greg Law of Wichita, KS. Grandchildren surviving Mildred are Richard J. and wife Brandi Parizek of Shawnee, KS, Erika and husband Bryan Atkins of Blue Springs, MO, Megan and husband Tony Zarembski of Ann Arbor, MI, Ben Powell of Ypsilanti, MI, Christopher Henson and Mark Henson of Independence, MO,  Molly and husband Dylan Couch of Mission, KS,  Nathan Law and Seth Law of Wichita, KS, Clayton and wife Annie Law of Duluth, MN, Ryan Law of Blackhawk, CO. Also surviving are nine great grandchildren.
Mildred was an honor graduate of Iowa City High School and graduated with honors from the University of Iowa with a major in Home Economics and Biology in 1941.  She taught high school biology and home economics classes in Oxford, Iowa near Iowa City for 3 years. She married Dr. Eldon J. Parizek in 1944 and they celebrated their 71st anniversary last August.  Mildred traveled widely with her husband including trips to Canada, Alaska, Mexico and Hawaii in addition to most of the states in the continental US.  She was a member of the Sunshine Club at Church of the Holy Cross Parish for many years and also volunteered at St. Mary’s Food Kitchen in Kansas City, Kansas.
Mildred was a beautiful person and was a treasure to her husband, children and their spouses, grandchildren and great grandchildren. She was always friendly and compassionate to all. Her health diminished steadily from Parkinson’s and she was homebound.  Mildred will be remembered lovingly by all who knew her and especially by those in her immediate family. Please offer condolences at www.overlandparkchapel.com.

To order memorial trees or send flowers to the family in memory of Mildred Parizek, please visit our flower store.