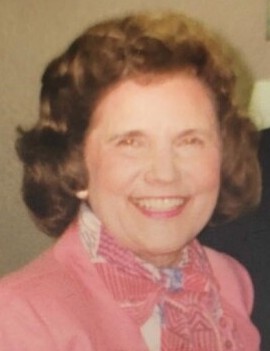 Mary Jo Buschman Leary, 98, of Leawood, KS died Tuesday, November 30, 2021 at her home surrounded by her family.  Visitation for Mary Jo will be held from 9:30 - 10:00 a.m. Saturday, December 11 at Cure' of Ars Catholic Church, 9401 Mission Road, Leawood, KS with the Mass of Christian burial to follow at 10:00 a.m.  Burial will be in Forest Hill Cemetery, Kansas City, MO. In lieu of flowers the family suggests contributions to Children’s Mercy Hospital, MD Anderson Cancer Center or  St. Luke’s Hospital Foundation.  Mary Jo was born November 4, 1923 to Josephine B. and Louis C. Buschman in Kansas City, MO. She was a lifelong resident of the Kansas City area and attended Border Star Elementary School and graduated from Southwest High School. She attended the University of Missouri, Columbia, MO, where she was a member of Pi Beta Phi sorority. She married her high school sweetheart, Thomas Conway Leary in 1944 and enjoyed 63 years of marriage until Conway’s death in 2007. She was a member of the Junior League of Kansas City, MO, the Westport Chapter of Daughters of the American Revolution, the Colonial Dames of America Chapter XIII, the Janet Boone Service Club, Mission Hills Country Club and the Cure of Ars Church.  Mary Jo spent her life caring for others and serving the community. She volunteered at the Crippled Children’s Nursery School, served as Chairman of the Junior League Thrift Shop, was a docent at the Nelson-Atkins Museum of Art and worked tirelessly on Thirty Miles of Art. Mary Jo worked on various fundraising campaigns including the United Way, the American Cancer Society, the Heart Fund, March of Dimes and the American Red Cross. She was active in P.T.A. and served as Chairman of the Cub Scout Den Mothers, she was also a Girl Scout Leader. Mary Jo spent countless fun-filled hours working with friends organizing reunions for her Southwest High School graduating class. Mary Jo was devoted to her family and cherished her large group of life-long friends.

The family wishes to extend special heartfelt thanks to Dr. Peter Holt, Mary’s Angels, Mary Hamilton, Letitia Roberson and Ebonique Washington; and Jasmine Bell and the staff of Monarch Hospice and Palliative Care for their compassionate and loving care of Mary Jo.

To order memorial trees or send flowers to the family in memory of Mary Jo Leary, please visit our flower store.