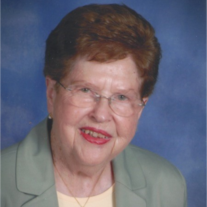 Mary Mildred Stoskopf passed away November 4, 2017. Mary was born at home on the farm near Baxter Spring, Ks on July 18, 1924.  She was welcomed by her parents, William and Lulu (Hall) Stoskopf, 5 brothers and 1 sister with a 6th brother joining them a few years later.

She attended a one-room school until the 8th grade and attended Baxter Spings High School.  This was followed by a degree in Biology and Chemistry from Baker University in Baldwin, Ks where she also continued voice lessons.    She was a member of Delta Delta Delta fraternity.  She received her Master’s Degree in Clinical Chemistry from Northwestern University in Chicago, and became a certified Medical Technologist.

Mary worked at Upsher Laboratories in Joplin, Mo and Kansas City, Mo followed by 28 years at the University of Kansas Medical Center, first in Clinical Chemistry and then as supervisor of the Endocrine Laboratory where she played a major role in developing the radioimmunoassay of hormones.

Music was an important part of Mary’s life from childhood to the last days of her life.  She began taking voice lessons at an early age and sang in church choirs, for dozens of weddings and funerals, with the McDowell & Shawnee Mission Chorale, and for the past several years with the Spin-Offs choral group.

Mary moved to Kansas City to care for the children of her brother after the death of their mother.  She was the mother in the lives of Bob Stoskopf and Julie Stoskopf Larson for 5 years.  In 1959 she established a home with Jessie Ball and Barbara Lukert, who became her life-long companions.  The “holy trinity” shared a full, productive, and happy life.

Mary had a zest for life and enjoyed traveling, sailing, time at their Tonganoxie cabin, entertaining, sabbatical time in England and Connecticut, and was always eager to learn new things.  She delighted in being with her nieces and nephews and gave them unfailing, unconditional love.  Mary had a contagious love for dogs, which brought her great joy.  She was a calm and quiet presence who led in unassuming ways, working diligently behind the scenes to make any endeavor a success.   Mary was president of the Kansas City Venture Club for professional women, treasurer for the Missouri chapter of Medical Technologists, and held multiple offices, including being president multiple times of Chapter EL, P.E.O.  She was an active member of the Rosedale United Methodist Church and Sharing Community for many years, and of Asbury United Methodist Church in Prairie Village for 25 years.  She served on numerous committees in the church but her major interest was always the choir.

Her companion and soul mate Dr. Barbara Lukert and beloved dog, Maggie of the home, 7 nephews, 4 nieces, and 22 great-nieces and nephews, survive Mary.
She was preceded in death by her parents, 6 brothers: Eldon, Paul, William, Roy, Alva, and Herbert Stoskopf, and one sister, Florence Stoskopf Dieken, 2 nephews and a niece.

A memorial service will be held on Saturday November 11, at 11:00 AM, preceded by a visitation at 10 AM.  In lieu of flowers please make contributions to the Asbury United Methodist Church, Cross-Lines Cooperative Council, or Kansas City Hospice.

To order memorial trees or send flowers to the family in memory of Mary Stoskopf, please visit our flower store.