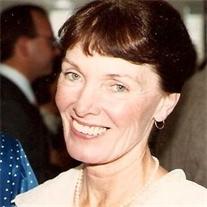 Mary B. "Bitsey" Jefferies, 82, of Prairie Village, Kansas, passed away on November 28th, 2013 at Brighton Gardens of Prairie Village.
Bitsey was born on May 29, 1931 in Philadelphia, PA. She graduated from Lower Merion High School in Ardmore, PA and then from Harcum Junior College in Bryn Mawr, PA. Bitsey is survived by Hugh Jefferies, who was just graduating from the University of Pennsylvania when they were married on March 16th 1951. Bitsey and Hugh were married for 62 years and their journey took them to residences in Virginia Beach, VA, Gladwyne, PA, Newport Beach, CA, Kansas City, MO, Lake Quivera, KS, and Fairway, KS.
In 1993 when Hugh retired they built a second home in Oysterville, WA, overlooking Willpa Bay. For the next 18 years they spent part of each year enjoying the Pacific Northwest, while entertaining both old and new friends.
Bitsey's greatest joy in life was her family. There was nothing more important to her than her three daughters – Robin (Dan) Younger of Leawood, KS, Kim Jefferies (Randy Hinkle) of Arendal, Norway, and Karen (Randy) Printz of Vancouver, WA. Her legacy includes four grandchildren; Max Younger, Kelly Younger, Ray Hinkle, and Ted Hinkle, and one great-grandchild; August Younger.
For 20 years Bitsey worked as a real estate agent, and was active as an interior designer. Her hobbies included her book club, tennis, decorating, and working in her gardens.
The family wishes to thank the staffs at the Forum of Overland Park, Brighton Gardens of Prairie Village, and Continua Hospice for the wonderful and compassionate care provided during the last months of Bitsey's life.
A memorial service will be held at a future date that allows her family to attend.
To order memorial trees or send flowers to the family in memory of Mrs. Mary B. "Bitsey" Jefferies, please visit our flower store.