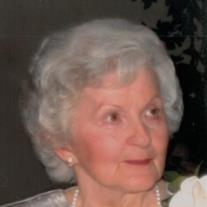 Marjorie M. Hodges Moore, age 91, Overland Park KS, passed away January 30, 2015 at Villa St. Joseph nursing facility and will be sorely missed by her family and friends. Visitation will be 9:30-10:30 a.m., Monday, February 9, 2015 with the Funeral Service at 11 a.m. Both will be at Overland Park Church of the Nazarene, 9030 Lamar, Overland Park KS 66207.  In lieu of flowers, the family suggests contributions in Marjorie’s memory to the church.

Marjorie was born August 7, 1923, in Downers Grove, Illinois and moved to Kansas City as a teenager where she met her first husband, Donald Hodges. They ultimately formed Don Hodges Construction Company that was active in the Kansas City area until Don’s death in 1983. During that time, Marjorie not only reared their three children, Cheryl, Jan, and Greg, but assisted Donald in the business with her skills in home decorating and her presence in the office. She lived her life with grace and joy for her family and church.

Marjorie was preceded in death by: her parents, Floyd and Carrie Meadows, and her first husband, Donald. She is survived by: her second husband, Gary Moore; her sister, Oceana Allen; her children, Cheryl (Steve) Cole of Olathe KS, Jan Harding Shannon of Stilwell KS, and Greg (Peggy) Hodges of Leawood KS. She was blessed with five grandchildren: Brandon, Ryan, and Joel Harding, Jennifer Shafer, and Brittany Hodges. She was also blessed with six great grandchildren who loved her dearly.  Please share a memory or offer condolences at www.overlandparkchapel.com.

To order memorial trees or send flowers to the family in memory of Marjorie Moore, please visit our flower store.