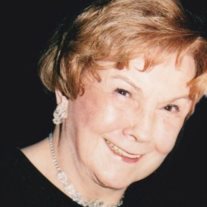 Marilynn Graham Armacost lost her courageous battle with breast cancer on August 24, 2014.  A Celebration of her Life Memorial Service will be held at Aberdeen Village Chapel, 17500 West 119th St, Wednesday, August 27 at 1:00pm.
Marilynn was born in Kansas City on March 10, 1922.  She attended Miss Hockaday’s School for Girls, William Chrisman High School where she earned The National Honor Society, and University of Kansas City (UMKC) where she joined MENSA and where she met her future husband.
A member of the Greatest Generation, she married the love of her life, Robert (Bob) Armacost, Jr. in June of 1942 and followed him to the Southwest to be near him while he served in the Army Air Corps during WWII.  After moving back to Kansas City she volunteered as a Gray Lady at General Hospital.  While raising their children Marilynn became active in the American Red Cross, serving as Johnson County chairman for three years.  She also became a member of The Kansas City Musettes, bringing children’s plays to schools in the Metro area.
During their 67 year of marriage, Marilynn and Bob were very active in the community.  They enjoyed their memberships in The Kansas City Club, Mission Hills Country Club where they often golfed and the kids swam, Indian Hills Country Club and The Saddle and Sirloin Club where they were active in the annual Horse Show, the American Royal Parade, and many, many trail rides as well as trap shoots.  Marilynn enjoyed giving parties and get togethers and was a most gracious hostess.  She loved the arts and was active in the Kansas City Atheneum Club, The Kansas City Philharmonic Association, The William Rockhill Art Gallery, The Kansas City Art Institute and the Missouri Repertory Theater.
When her children were grown, Marilynn studied graphoanalysis and was fascinated what she could read in other people’s handwriting.  She also started painting lessons and shared her talent with many friends and family painting their portraits.
Marilynn and Bob moved to the Armacost Ranch and spent many happy years enjoying ‘the country life’.  Marilynn always loved cats and dogs and when an orphaned calf needed to be fed she volunteered.  The first feeding was an experience as she learned how to feed …..the calf threw her all around the barn stall until she learned the best method!  She named all of her orphan calves….how many Amys did she have?  The barn cats were all her friends, but one of her favorite times at the farm were the beautiful sunsets enjoyed from the front porch.
Marilynn survived Ovarian cancer in 1984 for which she thanked her doctor, Darryl Wallace and God, to which Dr. Wallace replied “Yes, but not in that order.”
When she had a sroke in 2004, one of the nurses brought another nurse into her room saying, “this is the one that kept on driving!”  Marilynn thought that was her epithet, but she always wanted “overs”.
Marilynn will be welcomed in heaven by her husband, Bob; her son Robert III; her parents Seth Kyle Graham and Anne Rice Graham; her brother Rodger Graham and her sister, Dr. Penelope R. Graham.

Her caring ways will be greatly missed by her remaining children, Pamela (Robert) Bertoncin and Chris (Carol) Armacost , and her grandchildren, Jarrett Bertoncin, Jacquelynn Bertoncin, Scott Armacost Chapman and many, many dear friends.
The family would like to thank the entire staff at Aberdeen Village; Grace Hospice, especially Reverend “Beck” Schubert, Kim, Vivian; and Heaven Sent for their loving care.
In lieu of flowers, contributions to any No Kill Shelter, the American Cancer Society, Parkinson’s Society of the Heartland, The American Heart Association or the American Diabetes Association.

To order memorial trees or send flowers to the family in memory of Marilynn Armacost, please visit our flower store.