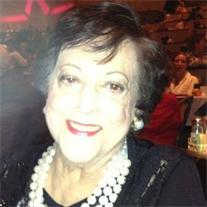 Marie Genevieve (Buzzo) Magyar passed onto eternal life on July 1, 2013. Funeral Mass will be held at Prince of Peace in Olathe, KS on Tuesday July 9th at 12PM with Graveside services at Johnson County Memorial Gardens 11200 Metcalf, OP KS 66210. Friends may call at DW Newcomers 8201 Metcalf, OP KS Sunday July 7 from 5-8pm and Monday July 8 from 5-8pm with the Rosary at 630pm Monday.

Marie "Mary" was born to James & Catherine (Allocco) Buzzo in Ozone Park, New York. A graduate of Woodrow Wilson High School at 16, she then went on to study at New York University (NYU). Her first love was always music and she studied opera. In fact, she was so good the school wanted to send her to Italy to advance her career. Marie's father would not hear of a 16 year old girl traveling alone to Italy, so her music focus shifted.

Marie was an executive secretary for an attorney in Manhattan before commencing work for USF&G. It was during this time that she earned her Insurance Broker's license. Marie could type 120wpm and was a whiz at shorthand which she used to this day. In the evening she was a professional singer in nightclubs in the City and on Long Island. She performed in USO shows with her beloved sister. Marie performed at Buddy Russell's Night Club in Garden City, NY. Her records were the most played and requested on the jukebox in this establishment. If not for her love of music she would not have met her husband of almost 47 years. He was one of her adoring fans that would come and listen to her perform nightly. Eventually she agreed to a date.

They left New York and came to Kansas City for Bud's job. Marie went into Real Estate with Bob Owen & Co. Realtors after the death of her little boy, Joey. She was a member of the Million Dollar Club and the 2 Million Dollar Club which were elite honors at the time. She then went to work for J.B. Magyar Real Estate Co. with her husband until the time of his death in 2005. Marie continued with her Real Estate license at Reece Nichols until the time of her passing.

Always looking for more, Marie joined Mid West Chandelier/LSI Lighting for 19 years. She made life long friendships with the owners, and so many wonderful people there. She left the company in 2008.

Marie had a passion for life that she lived through her music, singing, sports and her unconditional love for her family, friends and the Kansas City Chiefs. If you were her friend you were a friend for life. "You will never leave us, we carry you in our hearts, but oh how we miss you kissing us goodnight!" xo Margot & Dom

www.dwnewcomers.com
To order memorial trees or send flowers to the family in memory of Mrs. Marie Magyar, please visit our flower store.