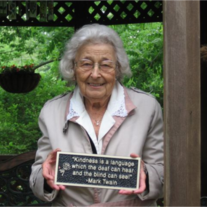 Lorena was born on May 8, 1912, in Kansas City, Missouri.  She graduated from Kansas State University in 1933 with a B.S. degree in Home Economics with Smith Hughes qualifications.  She was a member of the Alpha Delta Pi Sorority. After graduation, during the depression, she worked for the WPA, teaching cooking and clothing lessons to adults in Kansas City.

On October 6, 1934, she married John Wesley Meyers at his parents’ home in Shawnee, Kansas, and took up housekeeping in Overland Park, where she resided until she was 100 years old.

As the Depression continued, her career was devoted to teaching, social services, and food demonstration work.  She also did extensive traveling lecturing on the principles and methods of freezing foods. Later, she worked fourteen years for the Gas Company.  In 1959, she became a Consumer Affairs Officer for the Food and Drug Administration.  Her district included the states of Kansas, Iowa, Nebraska, and Missouri.  Her responsibilities included speaking engagements, tours of the agency, answering consumer requests and questions and responding to the media.  In 1979, she received a commendable service award for her effective implementation of a national FDA food labeling regulations.

She was active in various organizations including the American Association of University women, American Home Economics Association and as a board member of the Kansas Citizens Council on Aging, the Kansas Nutrition Council, the Kansas City Consumer Association, the Kansas City Home Economics Association, the Merriam Homemakers Association, and the Shawnee Mission Garden Club.  She received many honors for all of her efforts to improve the lives of thousands all over the country.  She received special recognition from the Missouri Association for Social Welfare Volunteers Against Hunger, helping people help themselves through home grown vegetable gardening for better nutritional health.  In 1976, she received the Special Service Award for her assistance in preparing a Directory of Federal Agencies and support in fulfilling the Federal Executive Board goals and objectives.

For twenty years, while working for the FDA, she taped radio programs for the Audio-reader at KU in Lawrence, Kansas.  Her “Consumer Report” for the blind and handicapped covered health and pocketbook protections.  The program was offered nationally and she was often on TV promoting the FDA.

Soon after her retirement from the FDA in 1984, she became a full-time volunteer as the National Organizer for the Widowed Persons Service.  She was responsible for establishing and maintaining on-going programs to help newly widowed people with their emotional and social adjustments to widowhood. She was personally responsible for establishing and maintaining approximately twenty-five programs throughout the state of Kansas and Missouri.  After 13 years, she decided to confine her supervision to only the greater Kansas City area.

In 1990, Lorena was asked to do a recorded and written history of her early years as one of the seven Consumer Consultants for the Food and Drug Administration in the United States. Copies are now available in the National Library of Medicine, Kansas State University, Salt Lake City, and the Smithsonian Institution.

Lorena Meyers was a dear and devoted born-again Christian who never missed an opportunity to pass out Gideon New Testament Bibles to everyone she met.  She attended the Overland Park Baptist Temple for many years after being a member of the Southwest Bible Church for more than forty-five years.  Because of her love of flowers and gardening, she designed and provided the fresh flower arrangements for that church every Sunday faithfully for more than thirty years.
Lorena was a dedicated and loving wife and mother, grandmother, great-grandmother, and great-great grandmother.  She spent her life serving other people and graciously giving of herself to everyone.  She is survived by a son, Jack Meyers and his wife, Jan, of Bucyrus, Kansas, Joleen Meyers Vatcher and her husband, Jack, of Seekonk, Massachusetts, three grandchildren, Tom Meyers, Bill Meyers, and Jaclyn Suzanne Vatcher Nutter, three great grandchildren and two great-great grandchildren.

Visitation will be 9-11:00am Saturday July 30, 2016 at the Overland Park Chapel, 8201 Metcalf Ave., Overland Park, Kansas.  A Memorial service will follow the visitation at 11:00 AM.  Burial will be at Johnson County Memorial Gardens.  Please omit flowers. In lieu of flowers, memorial contributions may be made in her name to Gideon’s International at P.O. Box 544, Shawnee Mission, Kansas, 66201 or Continua Hospice 13002 State Line Road, Leawood, Kansas, 66209. Fond memories and condolences for the family may be left at www.overlandparkchapel.com

To order memorial trees or send flowers to the family in memory of Lorena Schlemmer, please visit our flower store.