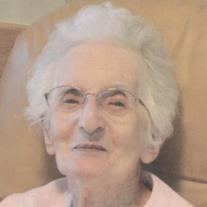 Lola Beatrice “Bea” Roberts, 92, was born September 25, 1922 on a farm near Columbus, Missouri.  Bea passed away on April 14, 2015 at Leonardville Care Center in Leonardville,l KS.  She was the daughter of Charles Andrew and Ruth Anne (Amer) Billingsley.  Lola taught school at Walden Rural Grade School in 1942 and 1943.  In May of 1947 she started working for Greyhound Bus Lines in Kansas City, MO, and worked there until November 1983 when she then took retirement.  She then began working part time as a bookkeeper for Getty Oil/Texaco from December 1, 1983 through November 1989.  During 1983 and 1989 she worked with her husband, Herbert W. Roberts, cleaning Christian Business Mens office and Magic Woods offices.
On February 18, 1951, she married Herbert W. Roberts, who preceded her in death on April 28, 1990.  Lola is survived by: daughter, Jacki Spoor; grandson, Sam C. Griggs; granddaughters Crystal A. Spoor and Wendy M. Spoor; great grandson, Levi C. P. Griggs; and ex-son-in-law, Morton E. Griggs.
In October 1944, she received Jesus Christ as her Savior at Kansas City Baptist Temple in Kansas City, MO.  She was baptized in November 1944.  In 1960 she changed her membership to Grace Baptist Temple in Kansas City, KS, where she worked in the Nursery and Junior Church and as church treasurer.  She was a member of the Christian Women’s Council for several years and was also bookkeeper for the Christian Business Men’s Committee of Kansas City.
Visitation will be 10-11 a.m., Monday, April 20, with service at 11 a.m. at Overland Park Chapel, 8201 Metcalf Avenue, Overland Park, KS.  Burial will follow at Memorial Park in Kansas City, MO.  Please offer condolences at www.overlandparkchapel.com.

To order memorial trees or send flowers to the family in memory of Lola Roberts, please visit our flower store.