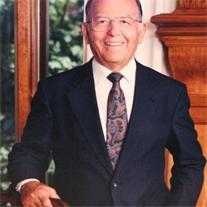 Dr. Leonard A. Wall, M.D., 92, of Leawood, KS, passed away on December 24, 2013, holding his younger son's hand.
Leonard was born on March 20, 1921 in Domby, OK to Sammie and Virgie (Woods) Wall. Dr. Wall served his country in the Army Air Corps as a B17 pilot during WWII, and he was a German prisoner of war. He was a well-known OB-Gyn in the Kansas City area before his retirement. He was a pioneer in laparoscopic surgery, fetal monitoring, and urogynecology. He was active in women's health world-wide and a clinic in Niger, West Africa, dedicated to the repair of birth injuries, is named in his honor. The urogynecology lab at St. Luke's on the Plaza is also named in his honor. Dr. Wall practiced at St. Luke's Hospital, where he was President of the Medical Staff, and served on the boards of both the hospital and the hospital foundation. Dr. Wall was a member of Prairie Baptist Church.
Leonard was preceded in death by his loving wife of 65 years, Evelyn. Survivors include his two sons, Dr. Leonard Lewis Wall and his wife, Helen of St. Louis, MO, and Dr. Terry Wall of Roeland Park, KS, two grandsons, Jimmy Wall of Washington, D.C and Thom Wall of St. Louis, MO.
Visitation will be held on Thursday, December, 26th, 5-7 PM, at Prairie Baptist Church, 7416 Roe Ave, Prairie Village, KS. The Funeral service will be held on Friday, December, 27th, 11:00 AM, also at Prairie Baptist Church. Interment will be at Hooker Cemetery in Hooker, OK. Memorial contributions may be made in Dr. Wall's honor to Worldwide Fistula Fund,http://worldwidefistulafund.org/ or to Prairie Baptist Church 7416 Roe Ave, Prairie Village, KS 66208.
To order memorial trees or send flowers to the family in memory of Dr. Loenard Wall, M.D., please visit our flower store.