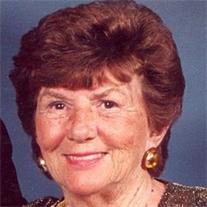 Lillian "Lil" Kathryn Hoy, 83, of Fairway, KS, passed away peacefully at home, April 18, 2013. Lil was born in Putnam County, IL to Frank and Bernice Roth on Jan 6, 1930 and was raised on a farm near Henry, IL. She was the first born, and she adored her younger sister Millie, and brother Frank.

Even at a young age, it was apparent that Lil was very smart and good at school. Remarkably, her teachers started her out in the 3rd grade and she graduated with honors as Salutatorian at the early age of only sixteen. Lil was also active in the 4H Club serving as President multiple times, participating in musicals and class plays, and also performing with her sister Millie at various events including the County Fair. And of course there were always the farm chores before and after school, milking cows, de-tasseling corn, and feeding the farm animals.

In 1946, Lil received a full academic scholarship to attend Illinois State University and worked at State Farm Insurance in Bloomington, IL to pay her living expenses. In 1948, Lil received her associate's degree, and State Farm asked her to move to Lincoln, Nebraska to help open a new office. Shortly after Lil transferred to the University of Nebraska, a friend asked Lil to go on a double blind date with some NU football players. Lil met Rex B. Hoy, the love of her life, and they were married on May 15, 1948. This was the beginning of a wonderful marriage and partnership that lasted nearly 65 years. The following year they became the parents of their daughter Sharon and in 1952, moved to the Kansas City area. Rex was teaching and coaching at Wyandotte High School as Lil maintained her employment with State Farm. Rex loved teaching and coaching, but through Lil, he could see the potential of being a State Farm Agent. In 1954, Rex became a State Farm Agent, and together with Lil as the office manager, the two of them built the foundation of a very successful agency that would thrive for over fifty years.

By 1969, Lil knew how to run a business well, and was ready for a new challenge. Together, Rex and Lil started a travel agency called International Tours. With Rex as the visionary, and Lil as the detail person, a hard worker who learned every aspect of the travel business, International Tours became a national travel leader over the next 28 years. As owner, operator, and President, Lil had more than 250 employees in over 50 locations across the country. International Tours ranked in the Top 50 travel agencies in the nation many times. Lil became a well known, respected, and successful leader in the travel industry. She served on the Board of Directors for Travel Trust International, she was a long time active member in the American Society of Travel Agents and she even graced the cover of Corporate Report magazine in 1988. Lil was also a long standing active member of the American Business Women's Association since 1957. She held many positions including President and was also named ABWA's Women of Year. Lil was also active and generous member of American Cancer Society.

In a wonderful marriage that lasted more than 6 decades, Lil and Rex were life long partners in marriage and also in business. They spent their favorite times together traveling the world, especially enjoying cruises, traveling to the Nebraska football games, going to Dallas, TX to see their grand children and spending time in Cancun with family.

Lil will be greatly missed by her family, friends in the travel industry, and friends at State Farm, employees, and clients. Lil was preceded in death by her beloved husband, Rex, her brother, Frank Roth Jr., and her parents. She is survived by her dear sister, Mildred Miller of Louisville, KY, daughter, Sharon Hoy Freeman of Mission, KS, granddaughters Wesley and Allison Freeman, grandson, Russell Freeman, and numerous nieces and nephews.
A memorial service for Lil will be held at 3PM, Tuesday, April 30, at Old Mission United Methodist Church, 5519 State Park Road, Fairway KS, 66205
Inurnment will take place at 2pm, Thursday, May 2nd, at Simmons- Saltillo Cemetery, 3501 Rokeby Road, Lincoln, NE 68430.
To order memorial trees or send flowers to the family in memory of Lillian Kathryn (Roth) Hoy, please visit our flower store.