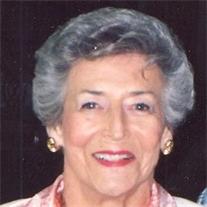 Born December 2, 1925 in Weston, Missouri, Lammie was the daughter of Charles D. Lamme, Jr. and Laura C. Lamme. She graduated from Barstow High School in 1943 and attended the University of Missouri, where she was a member of the Pi Betta Phi sorority.

Lammie married the love of her life, Jack D. McInnes III, in 1948 after he returned from World War II. She was a devoted homemaker and mother. She was also a talented artist, keeping a studio in the River Quay. She loved the arts, participated in the Plaza Art Fair, and was a Musette for the Nelson-Atkins Museum.

Lammie will always be remembered for her kind heart and loving smile. A devoted mother, grandmother and great-grandmother, she delighted in spending time with her family and friends. Her sense of humor, timeless style and gracious manner were known to all who met her.

In lieu of flowers, the family requests contributions to the Nelson-Atkins Museum of Art, Kansas City, Missouri, or, the National Emphysema Foundation, 128 East Avenue, Norwalk, Connecticut 06851.
To order memorial trees or send flowers to the family in memory of Mrs. Laurette "Lammie" McInnes, please visit our flower store.