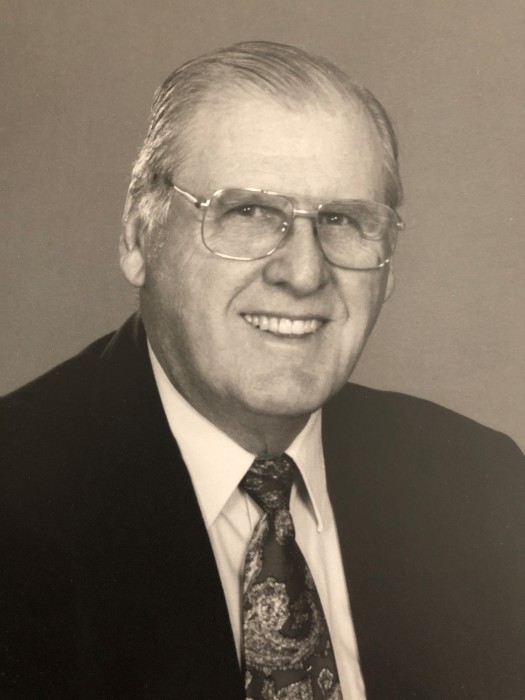 Dr. Kenneth A. Powell passed away on January, 1st 2019 surrounded by family at Shawnee Mission Medical Center. Dr. Powell was born in El Dorado, KS to parents Frank and Alice Powell. Ken spent his early childhood in Kansas, and later moved with his parents to Tucumcari, NM. In Tucumcari, Kenneth’s family ran The Powell News Agency, and later a tourist court, Coronado Courts, and restaurant in Deming, NM. Once Kenneth was of high school age he sought a better education, and moved to Las Cruses, NM to finish high school. Kenneth had a deep love for New Mexico, and attended New Mexico State University for his undergrad. During World War II, Kenneth served in the United States Navy, and was stationed in San Diego, CA. After the war ended, Kenneth returned to Kansas and enrolled in medical school at the University of Kansas. Kenneth decided to look up his friend, John Wineinger, from the Navy who lived in Lawrence, KS. When Ken went to knock on John’s door John’s sister, Carol, answered, and Kenneth forgot all about John. Kenneth fell in love at first sight with Carol Wineinger, and the rest was history (as he’d often recount). Ken and Carol married on November 22, 1950. After graduating from medical school both Powells started their medical careers in Leavenworth, KS, which is also where they welcomed their daughters. Gail born in 1959 and Leigh in 1961. In 1964, Ken and Carol designed and built their home in Leawood, KS, and moved their family to the Kansas City Suburb. Ken began his career at Kansas City Life Insurance in 1964, and would eventually become Medical Director. After retiring from KCLI, Ken continued to consult for various companies and organizations. When Ken wasn’t working he was caring for his family. Ken’s favorite pastimes included cooking, gardening, traveling, reading, and learning new technology. Ken welcomed a granddaughter in 1993, Rian Ray, to whom he was always close. Dr. Powell fully retired in 2012. Ken spent his last years in his home with his family. Dr. Powell is preceded in death by his parents, a sister, Edith Powell, and his wife, Dr. Carol Powell. Ken is survived by Gail Powell, Leigh Powell, Rian Ray, Chase Martin, and many relatives on his wife’s side. Services for Dr. Kenneth A. Powell will be held at the Overland Park Funeral Chapel (83rd & Metcalf) Sunday, January 13th. Visitation at 1, and service at 2 with reception to follow.

To order memorial trees or send flowers to the family in memory of Kenneth Powell M.D., please visit our flower store.