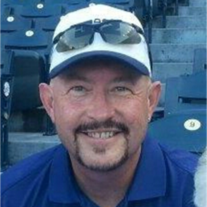 Kendall was born on December 24, 1960 as an only son and the first of two children born to Harold and Karaleen Adkins. He was raised in Gladstone, Missouri and grew up with his childhood friends Chris Regas and Paul McKnight.  Together, Kendall and the boys played little league and caused summer ruckus each and every year.  In true Missouri fashion, Kendall would go to the family farm and help Grandpa Lee with the pigs, shoot bullfrogs at the pond and play games with his friends.  He even won a blue ribbon at a fair for hog raising.
As Kendall grew up, he felt a calling to radio and broadcasting.  He attended Central Missouri State University in Warrensburg, MO and earned a Bachelor of Arts in broadcasting.  In hopes of making it big as a voice in radio, he moved to Ahwatukee, AZ after he was hired by 93.3 KDKB based in Mesa, AZ.  There, he not only jumpstarted his career in radio, but he also became a father.  Kendall’s first child and son, Jeremy, was born in 1988, and Jeremy was followed by his sister Julie in 1990.  Raising two kids was not an easy task, and if you ever needed to find Kendall when he wasn’t at work, he was playing in the backyard with Jeremy or driving Julie around for miles and miles trying to get her to sleep.  After enduring the terrible twos, a second time, Kendall and his family packed their bags and moved to Lenexa, KS, where they were close to family.
Back in Kansas, Kendall raised his two children with diligence and love, while continuing his radio dream at Entercom Broadcasting Corporation. At Entercom, Kendall experienced irreplaceable musical moments, meeting icons such as John Mellencamp, and he even introduced the Rolling Stones.  While life with rock and roll was a great life to live, Kendall needed more.  It was then that he discovered his most ardent passion aside from fatherhood - little league baseball.  When his son’s baseball career was finished, Kendall realized that Johnson County 3&2 Baseball was his home away from home.  He became active in the youth baseball community, becoming an umpire for Johnson County 3&2.  It didn’t take long to realize that his passion was also something he excelled at, as he was quickly promoted to umpire high school varsity and state tournament games.  Kendall wanted to be more involved though.
Kendall became a field manager at Johnson County 3&2, as well as an umpire supervisor.  He conducted all of these duties while also still finding time to umpire baseball games.  Soon he was honored by being voted onto the Johnson County 3&2 Baseball Board of Directors.  Kendall devoted many hours to youth baseball and dedicated his time to an issue within baseball of ever-growing importance: a young pitcher’s arm.  Kendall was the leading advocate for the reduction of pitches thrown for little league pitchers, and helped initiate rule changes in an effort to preserve the arms of young pitchers.
While Kendall’s legacy will be felt in youth baseball and in broadcasting, everyone’s greatest memory will be how he touched their lives.  In the cut throat enterprise of broadcasting and marketing, Kendall made people stop and think about whether or not what they were doing was right.  When Kendall saw young arms being whittled away in youth baseball, he did his part to change that.  If one of his children was having a tough time being an adult, Kendall was there to guide them.  When his son was in Iraq, he organized cookie drives, gathered letters from everyone and routinely placed care packages in the mail to not just his son, but to his son’s fellow soldiers too.  When his daughter moved away for college, Kendall was there every step of the way.  Even though they were separated by distance, he was always by his daughter’s side in some shape or form.  If something were to happen to a 3&2 employee, Kendall went out of his way to organize services and fundraisers for the employee and their family.  Upon Kendall’s passing, his co-workers wondered what they would do without Kendall, because Kendall was always there to fix things.
All of us are wondering what we’re going to do without Kendall. We’re wondering how we start our mornings without phone calls with him.  We’re wondering how we will smile without the letters he left for his family on a completely random basis.  We’re wondering how our moral compass will be directed, because he was the most selfless and service-oriented man anyone knew.  We’re wondering how we are going to live our lives, because no one hungered for life quite like Kendall.  Kendall and his beautiful wife Pam went on adventure after adventure with one another, and their expeditions brought them joy, happiness, strength and most of all, love.
When Kendall passed away on April 27, 2016, at the age of 55, he passed that love and life he enjoyed so much onto others.  While his death was a result of a heart attack, he passed away conducting one last selfless act: the donation of his organs helping countless others.  He also passed on his legacy of kindness, love and care to his wife Pam, his children Julie and Jeremy, his sister Vickie and his mother Karaleen, all who survive him.  He was preceded in death by his father, Harold Adkins.  To help carry on his memory and legacy of love and life, memorial contributions may be made to “3&2 Baseball Kendall Adkins Memorial” at P.O. Box 14011, Lenexa, KS 66285.

Your browser does not support this video format. You should be able to view it in Chrome, Safari or Internet Explorer.
To order memorial trees or send flowers to the family in memory of Kendall Adkins, please visit our flower store.