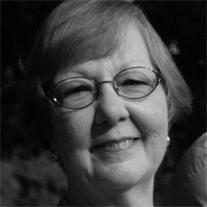 Karen K. Peters, 67, passed away peacefully on Sunday evening, surrounded by family, after a brief but valiant battle with cancer.

Karen was born January 11, 1946, the only child of Robert N. and Maxine E. Kirk. She attended Santa Fe Trail Elementary, Milburn Junior High School and Shawnee Mission North. Her family relocated to California during her high school years, and she graduated from Bolsa Grande High School and started college at Long Beach State University. She returned to Kansas and studied physical therapy at the University of Kansas. She met her future husband, Eric Peters, in Lawrence. They married on May 24, 1969.

She worked as a physical therapist from 1969 to 1973, after which she became a stay-at-home mom. She later returned to the workforce, at the Trading Post at Old Shawnee Town. She worked for the Shawnee Mission School District for 19 years, as a paraprofessional at SM West, an office and library aide at SM Northwest, and finally as the receptionist at SM North, a job she held until her death. She was delighted to return to North, as she always considered it her school…she attended North as a student and was active as a North parent when her children were students there.

The job she held in the highest regard was that of mom (and later grandma). She never missed a sporting event, dance recital, band concert or theatre performance. She was band parent officer and was a lifetime member of the PTA.

She loved animals, all things KU, history, shopping and Sonic Diet Coke (with chocolate). She was a member of "the card club" made up of dear friends for nearly 35 years (despite not actually playing cards for the last 20 years). She was an alumnae initiate of Alpha Xi Delta and a member of the Shawnee Historical Society.

She is survived by her husband of 44 years, Eric; son, Kirk and daughter-in-law, Nicole; daughter, Amy Morgan and son-in-law, Mike; and three grandchildren, Abbie, Nathan and Austin. She also leaves behind her pets, Lucy and Emily.