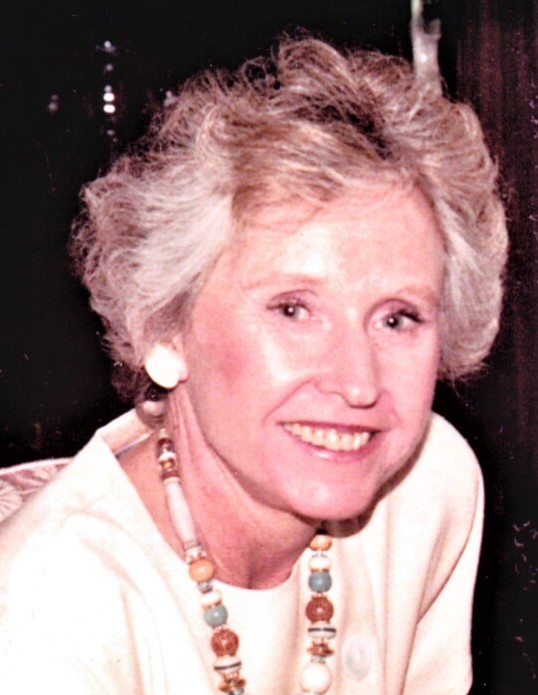 Joy Warner Laws Jones was born in Kansas City, Mo. on Jan. 10, 1932. She passed at home on Sept. 14, 2020. Her parents were James (Bud) Aubrey Laws, Jr. and Grace Warner Laws. Bud was born on a farm near Norborn, Mo. in 1902. Grace was born in Fort Scott, Kansas in 1906. Joy attended Bryant Elementary school, where her favorite teacher was James Hazlett. She attended the Sunset Hill School, then Southwest High School, graduating in the class of 1949. Then she went to the University of Missouri at Columbia, graduating in 1953. She was a proud member of Kappa Kappa Gamma sorority. She majored in English and was thereafter always correcting the grammar and usage of the English language by journalists, TV personalities, her husband, and children. She made Phi Beta Kappa her junior year.

She married Ensign Russell Scarritt Jones, US Navy, in 1953 at Central Methodist Church. After living in Long Beach and Coronado California, and at home with her mother while Russ was in the Navy, they lived mostly in Prairie Village and Mission Hills Kansas. They had three children, nine grandchildren, and in 2019, a great grandson. She was a devoted to her many life-long friends, with whom she shared thousands of hands of bridge and a few glasses of wine.

Joy worked as a creative artist, designing cards for Hallmark while in high school and college. She loved going to work and being paid to sit and draw all day, doing what she enjoyed doing most. Her mother, Grace, was one of the first five artists hired by Hallmark in 1926. Later, Joy studied and learned to sculpt in wax from pictures and sketches of animals and children. She had them cast in bronze, some of which she sold. She said the finest compliment was when one was stolen from a store. Her most famous sculpture was a Missouri river boat created for the River Club.

She actively worked with the KKG alumni organization for their annual Christmas house tour, for the Pembroke Country Day School annual clothesline sale, and the Junior League, all of which raised funds for local charities.

She loved to play bridge, read books, and to garden. She spent hours in her lovely flower gardens until her back told her to stop. She then started arranging cut flowers and was awarded many first place awards for her arrangements by the prestigious Westport Garden Club.

She also loved traveling with her husband and friends, seeing and enjoying the different cultures of Europe, India, East Asia and Africa. Seeing the animals in their native habitat on safaris in East and South Africa was a highlight for her.

She loved cats, and always had one until she and Russ moved to the Forum retirement home in 2014. The most important day of the week was always hair day at the salon.

Memorial donations may be made to the City Union Mission, the United Methodist Church of the Resurrection, or Harvesters.

To order memorial trees or send flowers to the family in memory of Joy Laws Jones, please visit our flower store.