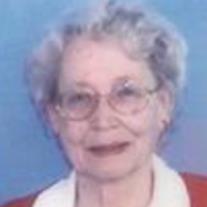 Joyce E. Sheely, 87, Overland Park, KS, passed away on December 6, 2014.  A Memorial Service will be held at 7:30 p.m., Wednesday, December 10 at Overland Park Chapel, 8201 Metcalf Ave., OPKS.
Mrs. Sheely was born in Fairbury, NE on October 4, 1927 to parents Arthur and Thelma (Beck) Williams.  She met and married Robert Sheely, who predeceased her in 2007.  She is survived by:
a son, Michael (Jeanette) Sheely of Overland Park, KS; a daughter, Janet (Phil) Shuey of Parkville, MO; one grandchild; and one step-grandchild.
Arrangements: Overland Park Chapel  913-648-6224.
To order memorial trees or send flowers to the family in memory of Joyce Sheely, please visit our flower store.