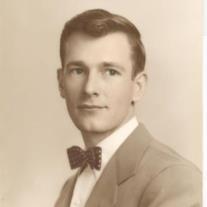 Joseph B. McMillin, 90, Overland Park, KS, passed away July 1, 2015 at John Knox Village House in Lee’s Summit, MO.  Per Joseph:  “I did some good things, I did some bad things.  Amen.”
He was born in Deepwater, MO to Joseph Edward and Ruth Alliance (Vickers) McMillin and was one of eight siblings who survived the Roaring 20’s, the Great Depression, WW II, and their father’s death in 1955.  Joseph graduated from Deepwater High School in 1942 and was drafted into the nearly-created United States Army-Air Force.  He was in charge of flight schedules which included bombing missions, one of which he accompanied during his tenure.  A man of true and honest character, he earned the lifelong respect of friends and family.  He was a “class act” and always there for those who needed him. He was preceded in death by his parents, siblings, and a cousin (“brother by heart”), Chester in 2008.  Precious memories will remain with all of his family and friends.
Graveside services, with military honors, will be 1 pm, Monday, July 6, 2015 at Englewood Cemetery in Clinton, MO.  Please offer condolences at www.overlandparkchapel.com.

To order memorial trees or send flowers to the family in memory of Joseph McMillin, please visit our flower store.