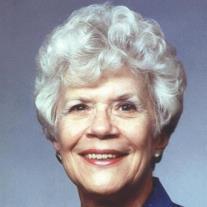 Joned Billings Colvin Slover, 85, Kansas City, MO, passed away November 30, 2014 at Kingswood Senior Living Community.  Memorial services will be 12 o’clock (Noon) on Saturday, December 6, 2014 at St. Michael’s and All Angels Episcopal Church, 6630 Nall Avenue, Mission, KS.  Visitation will be one hour preceding the service at the church.
Joned was born February 17, 1929 in Kansas City, MO, to parents John H. Billings, DDS, and Edna (Scotten) Billings, known in Kansas City as “Mama Music” and “Episcopal Mother in Israel.”  She graduated from Westport High School, earned her undergraduate degree from the University of Missouri, and her Master’s from the University of Kansas, School of Religion.  She and her first husband, George Colvin, were founding members of Christ Episcopal Church in Overland Park.  They later became members at St. Michael’s and All Angels where she served as director of Christian Education for more than 15 years.  She served with the Commission on the Ministry for the Diocese of Kansas for 27 years.  This was the first time lay persons were appointed to the Commission.  Following the death of her first husband, she met and married J. Elwood Slover of Topeka, and they enjoyed 29 years of marriage.  Joned was a member of Kappa Alpha Theta and the P.E.O. Sisterhood.
She was preceded in death by:  Her first husband, George Million Colvin; and a sister, Nancy Billings Lint.  She is survived by:  Her husband, J. Elwood Slover; two daughters: Diane Colvin (Patrick) McCarthy, and Debra Colvin Wilson (Al) Holtkamp; 3 stepchildren: Tom (Mitzi) Slover, James (Pam) Slover, and Ann Slover (Bruce) LaCour; 6 grandchildren: Megan, Katie, Mallory, Mary Lynn, Emily and Michael; and 6 great grandchildren.  In Joned’s memory, contributions are suggested to Kingswood Foundation, 10000 Wornall Rd, KCMO, 64114, or to Kansas City Hospice, 1500 Meadow Lake Parkway, Suite 200, KCMO, 64114.  Please offer condolences at www.overlandparkchapel.com.

To order memorial trees or send flowers to the family in memory of Joned Billings Slover, please visit our flower store.