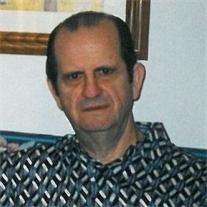 John James Pappas, 76, of Wichita, KS, passed away on February 2, 2013.
John was born on October 4, 1936 in Kansas City, Kansas. He retired from Sears after 35 years. John proudly served his country in the U.S. Army. John is preceded in death by his parents James and Katherine Pappas, brothers Bill and Pete.
John leaves behind his loving wife, Linda, his son, Michael (Christine) and two grandchildren Lexi and Brayden Pappas of Wichita, and his brother Leo. He leaves behind many friends, nephews, nieces, and sister in laws. The family will receive friends on Thursday, February 7th, 6-8 PM, with a Trisagion service to be held at 7:00 Pm, at D.W. Newcomer's Sons Overland Park Chapel. A Funeral Service will be held on Friday, February 8th, 10:00 AM, at St. Dionysios Greek Orthodox Church, 8100 W 95th St Overland Park, KS. Interment will follow at Maple Hill Cemetery in Kansas City, KS. A gathering after the interment on Friday will be at
Johnny Cascone's Italian Restaurant
6863 West 91st ST
Overland Park , KS.
To order memorial trees or send flowers to the family in memory of John Pappas, please visit our flower store.