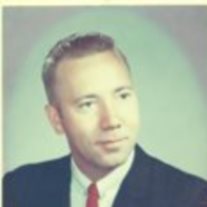 John William Cochran, 84, of Merriam, Kansas, passed away on September 16, 2014 at his home.  John was born on March 3, 1930 in Kansas City, MO to William and Dorothy (Kaney) Cochran.  He was a 1947 graduate of Westport High School and soon after married his high school sweetheart, Joanne Laird.
John and Joanne traveled joyfully through life together for 58 years until her passing.  The road traveled included John’s service in the Army, his work as a feed salesman in Fall City Nebraska, in the Kansas City stockyards, and farming land in Lees Summit.  John and Joanne purchased Window Flair Draperies in 1969, which he continued to own for 45 years until his passing.
Many friends and family surrounded John during his last days and shared memories of his love for dancing, tennis, the Boy Scout Troup from his youth, and vacations around the world.  He is remembered as a man that was kind, generous, engaging, and rooted in his Catholic faith.
John is survived by his son and daughter-in-law John and Michelle Cochran of Shawnee Mission, KS; daughter Judy George of Merriam, KS.; Grandchildren Kelly Cochran of Leawood, KS; Benjamin Cochran and Kenneth Cochran, both of Shawnee Mission, KS; Deanna and Brian Hager of Lenexa, KS; David George of Kansas City, KS; Great Granddaughter Ashlyn Hager of Lenexa, KS; Sister, Jean Branner and Sister-in-law LaVaughn Weaver both of K.C., MO.
He is preceded in death by his wife Joanne Cochran whom he deeply loved.  He  approached the end of his time with grace and anticipation, knowing that he would be reunited with Joanne for an eternal dance.
Visitation will be from 4-6 p.m. on Sunday, September 21 at Overland Park Chapel, 8201 Metcalf Avenue, Overland Park.    Mass of Christian Burial will be at 10 a.m., Monday, September 22 at St. Pius X Catholic Church, 5500 Woodson, Mission, KS.  Burial will follow at Mount Muncie Cemetery in Lansing, KS.  The family suggests that contributions be made to Catholic Charities of Northeast Kansas, 9808 W. 87th Street, Overland Park, KS, 66212.  Please offer fond memories and condolences at www.overlandparkchapel.com.


To order memorial trees or send flowers to the family in memory of John Cochran, please visit our flower store.