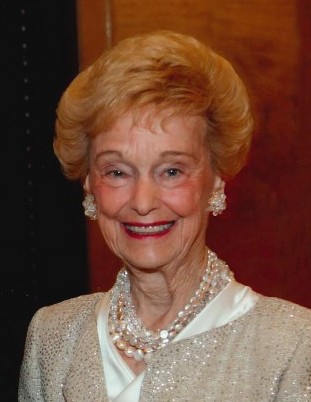 Joan “Jody” Jenkins Bartlett passed away peacefully on March 10, 2019.  She was 94.  Jody was a wonderful, determined and gracious woman.  She defined elegance and imbued her world with style.  She cared deeply for her family, friends, and community.

Jody was the widow of Paul D. Bartlett, Jr., chairman of Bartlett and Company.  They were married for sixty-five years.  They had four children and dedicated themselves to their family and the company.  They shared a passion for travel and for opera. She planned extraordinary trips that took them around the world, and La Traviata at La Scala was one of their treasured experiences.  Both were enthusiastic walkers; they loved hiking in Colorado and were known for the seven-mile walks they took around our city on most Saturdays and Sundays.

Jody was born June 11, 1924 in Kansas City, MO.  She was the second daughter of Emily Fitch Jenkins and Frederick Bliss Jenkins, President of Jenkins Music Company, the largest music company in the Midwest. She attended The Bryant School and graduated from Sunset Hill High School (1942) where she was honored as the “Queen of May Day.”  After graduation from Skidmore College (1946), Jody took a job with the Port Authority of New Orleans to promote trade throughout the city.  She always thought fondly of her time in New Orleans as a young, professional woman and enjoyed sharing memories about the adventures that were had and friendships that were made.

Jody and Paul met at a Christmas dance, and it was their romance that brought her back to Kansas City.  They were married here in 1949 and honeymooned in Carmel, California. Carmel quickly became one of the couple’s favorite places and their second home.

Jody will be remembered by all for her kindness, strength and infectious laugh. She was a vivacious conversationalist who had the gift of making everyone around her feel special and valued. Those attributes made her a fabulous hostess.  Entertaining friends and family was one of her favorite activities. She was a skilled and competitive tennis player, a sport she learned during childhood summers spent in Epworth Heights on the shores of Lake Michigan. She also enjoyed playing bridge and dancing. She loved being a member of the Westport Garden Club, an organization that combined her love of gardening and spending time with her dearest friends.  In her later years she enjoyed attending Village Presbyterian Church and found joy in the music and word of the Lord.

Her entire family is eternally grateful for the phenomenal care Jody received from all her caregivers, Leona Anthony, Melinda Bird, Susie Jianas, Chasity Mwangi, Julie Rinard, Donna Robinson, Laticia Ross, Damita Jo Sterling, and Debbie Yoeman. They were lovingly referred to as “Jody’s girls;” and to Ed Straley, who will always be known as the person who could make Jody smile.

Jody is preceded in passing by her parents, her two sisters, Marilyn Sinclair and Winifred Spradling, and her husband, Paul Bartlett, Jr. A memorial service will be held on Thursday, March 28 at 10:30 AM, at Village Presbyterian Church, 6641 Mission Rd, Prairie Village, KS 66208.  In lieu of flowers the family suggests donations be made to the Lyric Opera or Village Presbyterian Church.

To order memorial trees or send flowers to the family in memory of Joan "Jody" Bartlett, please visit our flower store.