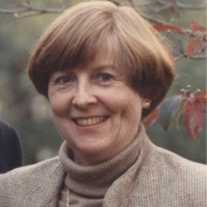 Joan was born on May 9, 1930, in Omaha, Nebraska, to Lois and Leland Snider. She was an only child in a family with broad Nebraska roots. Her family later moved to Kansas City, Missouri, where she attended Southwest High School. The red-headed young girl became known as Pinky, a name that reflected her fun loving spirit and stayed with her a lifetime. She established many friends at Southwest and loved to attend Southwest reunions. (She had been scheduled to attend her 70th reunion this fall).

Pinky graduated from the University of Missouri where she was a proud member of Pi Beta Phi sorority. She cherished her lifelong college and sorority friends. She met her husband, Gordon Wells, at Mizzou and they were both proud Tigers and avid football fans. She also attended Middlebury College where she studied foreign languages.

Gordon and Pinky were married in 1953 at the Country Club Christian Church and celebrated 61 years of marriage December 19, 2014. They had two children, Gordon E. Wells, Jr. (Sandy) and Sally L. Wells. Pinky was by Gordon’s side throughout a successful career in banking in Kansas City. She was a member of PEO and an active volunteer with the Junior League of Kansas City, Missouri, the DeLano School and Children’s Mercy Hospital. She and Gordon were proud to have established a scholarship in Allied Health at CMH.

Her May birthday regularly fell on Mother’s Day and perhaps this was why she was such a wonderful mother and grandmother, involved in the lives and activities of her children and grandchildren. She especially loved holiday gatherings when everyone was home together.

She and Gordon were members of Mission Hills Country Club and the Village Presbyterian Church. At Village, Pinky and Gordon were regulars at the 8:00 am service and sat in the same seats in the same pew surrounded by the same friends for years. Pinky was an excellent crossword puzzler and avid bridge player until the end. She loved her family, her old friends and Kansas City, and was excited recently to contribute to the reconstruction of the Meyer Circle Fountain on Ward Parkway because it rekindled fond memories of fun times.

The family wishes to thank Pinky’s friends and caregivers at Claridge Court, Interim, Vitas Hospice and the Village Church. A memorial service will be held on Saturday, December 2, 2017 at 1:30 at the Village Church Chapel with a reception to follow at the church. Pinky was preceded in death by Gordon in 2015 and is survived by her daughter, Sally Wells, and son, Gordon Wells, Jr. and wife, Katherine Lindeman Wells, grandsons, Robert Snider Wells PhD of Kansas City, James Preston Wells of Brooklyn, New York, and Curtis Lindeman Wells of Prairie Village.

In lieu of flowers, contributions are suggested to the Gordon and Joan Wells Allied Health Scholarship Fund at Children’s Mercy Hospital or the Village Presbyterian Church.

To order memorial trees or send flowers to the family in memory of Joan Wells, please visit our flower store.