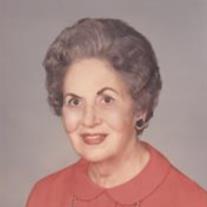 Jeanne M. Roebuck, 95, passed away on Aug 29, 2015.  Jeanne was born in 1919 in West Virginia, attended Marshall University, and worked for a group of surgeons at the Medical College of Virginia in Richmond where she met her husband, Edward T. Roebuck, during WWII.  They married in 1946 and lived in Kansas City where they had three children who survive her, Jeanne, David, Margaret, and their spouses, and two granddaughters, Allison and Eva.  She was preceded in death by her husband.  She was a member of the Shawnee Mission Chapter of the DAR over 25 years.
A visitation will be held from 5:30-8 pm on Wed. Sept 2 at Overland Park
Funeral Chapel, 8201 Metcalf, followed by a funeral service at 11 am, Thurs.
Sept 3 at Merriam Christian Church, 9401 Johnson Drive, Merriam, KS 66203
where she was a member for nearly 60 years.  In lieu of flowers the family
suggests contributions in her name to the church. Online condolences may be left at www.overlandparkchapel.com

To order memorial trees or send flowers to the family in memory of Jeanne Roebuck, please visit our flower store.