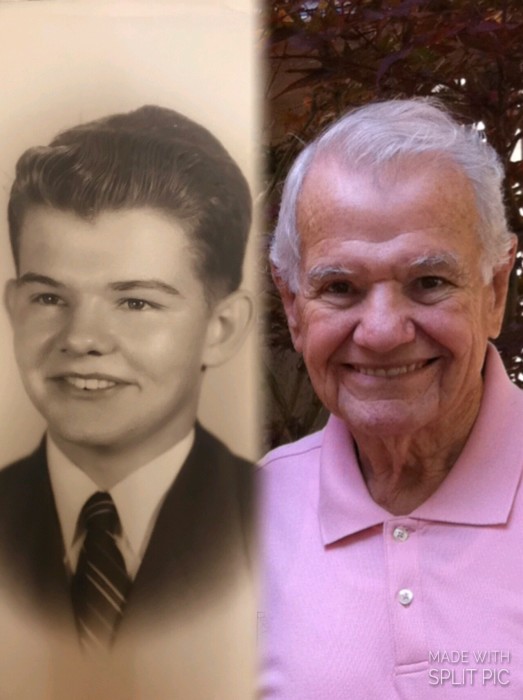 Jack Lee Strange passed away unexpectedly on April 5th, 2018 at Shawnee Mission Medical Center.  He was a quiet, gentle man whose sparkling eyes and beaming smile would fill a room with joy. He had a huge heart that knew no stranger and a love for life, friends, and family that is something all who encountered were blessed to have experienced.

Jack was born on May 17, 1930, at KU Memorial Hospital, now KU Medical Center.  He was always proud of the fact that he’d come full circle back to Kansas City for the last part of his life.  He was the son of Charles and Margaret (Ealick) Roberts but was later adopted by his maternal grandmother, Etta Pearl (Jeffries) Strange, and step-grandfather, A.W. Strange.  In 1944, he moved with his family to Phoenix. AZ. In 1946, he moved to Augusta to live with his birth mother, Margaret Norton, and her husband, Clyde.

In high school, Jack played for the Augusta Oriole Football Team as a lineman and began working at Mobil as an office boy during his junior year. He graduated from Augusta High School in 1949. He attended Wichita State for a semester and then enlisted in the local National Guard Unit. During his 20 years of service, he rose from Private E-1 to Captain and was Commander of the local unit from 1961 until his retirement in 1969.

Jack loved his weekend drills with the National Guard and spending time with many great men that became lifelong friends.  During this time, he continued his employment with Mobil Oil and rose from office boy to positions of Light Oil, Treating, Blending, and Shipping Supervisors.  Jack transferred with Mobil Oil to Beaumont, Texas when the Augusta refinery closed. He retired in 1987 with 39 years of employment.

Jack was a devoted and loving husband, father, and cherished grandpa (AKA Papaw). He always enjoyed starting every morning with a cup of coffee and sitting beside the love of his life, Donna Jean. Jack and Donna were each other’s first loves. They fell madly in love and married on June 1st, 1951.  Their love was timeless and continued to flourish for 67 years. They remained loving partners until his death. Jack and Donna had one son, David, and Jack could not have been more proud of him.  He loved watching his son play sports and never missed an opportunity to cheer for him.

Their little family of three eventually grew bigger with the addition of David’s wonderful wife, Stephanie, and their two beautiful children, Alyssa and Brent. Family was everything to Jack and he could always be found spending time with the people he loved and cherished most. Whether he was playing Super Mario with his wife or going to countless music and sporting events to support his grandkids, he was always there with a loving smile and hug. The family shared marvelous adventures to both Hawaii and Alaska and those fabulous memories will live on in their hearts forever.

Jack is survived by his wife Donna, son David, daughter-in-law Stephanie and grandchildren, Alyssa (24) and Brent (19) all of Overland Park, KS.  He also has a niece, Linda Bower, nephew Dale Borg, and many close friends that have become family to him. He had a special way of brightening everyone’s day and Jack’s generous spirit will be greatly missed by all.

To order memorial trees or send flowers to the family in memory of Jack Strange, please visit our flower store.