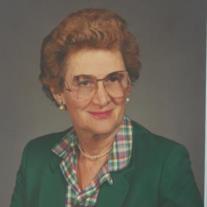 Ivanelle Manning, 93, passed away October 7, 2014, at Aberdeen Village in Olathe, KS. She leaves behind sons Tom (Susan) of Lenexa and David (Reta) of Manhattan, 3 grandsons (T.J., Christopher and Joshua), and 17 nieces and nephews. She is predeceased by her husband of 61 years, Tom, and older brother Chester Garthwaite.
“Ivy” was born May 25, 1921, at Mt. Hope, WI, the daughter of Harry and Mabel Garthwaite.  She graduated from the University of Wisconsin at Stout with a degree in Home Economics, then taught Home Ec in Algoma, WI. During that time period she learned to fly, and once surprised her family by landing in a field of the family farm in a little yellow Piper Cub.
With the onset of World War II she joined the Red Cross as a food manager, serving in India, China and Burma. After the war she joined TWA as a flight attendant, and later became a hostess trainer. She began attending Community Christian Church where she met Tom, also a pilot. Their first date was night flying. The couple married at the church in November of 1952, and served many years teaching Sunday school and doing youth work.
Ivy held numerous positions at the church, as well as The Salvation Army. She conceived the idea of the Salvation Army Omelet Brunch, which became a yearly fund-raising tradition for the Women’s Auxiliary that continues to this day.
In their long time home in Mission, there was a “sewing room.” In that room there was a sewing machine. And a phone. And a typewriter, a couple of desks and a half dozen filing cabinets. It was from this “Command Central” that Ivy conducted her charitable work. If something actually needed to be sewn, she could do that, too. Her multifaceted life included employment at Leiter's Designer Fabrics, sewing, gardening, painting, presenting book reviews and was always "an absolutely great neighbor!"
She raised two adoring sons, became a “favorite aunt” to nieces, nephews, and their progeny and, as one might imagine, performed exemplary duty as a grandmother. She was simply a wonderful wife, mother, aunt, mentor, and a remarkable servant to God. She will be greatly missed by her family as well as neighbors and friends.
Visitation Friday, Oct. 17, from 6-8 PM at Overland Park Chapel, 8201 Metcalf Avenue, Overland Park. The celebration of her life will be Saturday, Oct. 18 at 3 PM at Community Christian Church, 4601 Main St., Kansas City, MO, with a reception following.
Contributions in Ivy’s honor may be made to the Salvation Army of Kansas and Western Missouri.  Please offer condolences at www.overlandparkchapel.com.

To order memorial trees or send flowers to the family in memory of Ivanelle Manning, please visit our flower store.