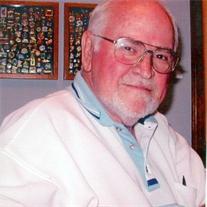 Ivan C. Risley passed away gently while holding the loving hand of his devoted wife, Maggie, on Tuesday, August 6, 2013 at Freedom Pointe Senior Care Living Center where they have been residents for over three and a half years.
Ivan was born in Nickerson, Kansas in 1929 on what would become Pearl Harbor Day. He could describe the events of that infamous day well. He could also describe the dust bowl of the 1930s in central Kansas.
He attended Union 5 Rural Grade School graduating with 12 other class members. After graduating from Reno Community High School in Nickerson, he attended Kansas State University and became a lifelong Wildcat. After receiving a BS in Industrial Engineering from KSU, he served in the Air Force during the Korean War. He eventually earned his private pilot's license.
He married Mary Margaret "Maggie" McKelvey in 1956 whom he had met at KSU after she and a friend had almost ran over him one spring day in Manhattan.
Most of his career was spent with John Deere in Iowa and Bendix Corporation here in KCMO.
He enjoyed playing golf, raising flowers, collecting antique tools, auctioneering and cats besides his wife's excellent cooking. They traveled extensively in China and Europe. He was a prominent member and former officer of the Early American Industries Society and the Sons of the American Revolution.
He was a deacon of Country Club Christian Church where he spent many hours serving on and leading the building committee. At CCCC he was known for his humorous board reports delivered with his dry wit.
He is survived by his wife, Maggie and by the family of his deceased sister, Doris Ankerholz. Those family members include his brother-in-law, Jay Ankerholz (So. Hutchinson, KS), nieces Kelli Petz (So. Hutchinson, KS) and Debbie Smith (Protection, KS) and nephew, Steve Ankerholz (Avon, CO). His survivors also include many longtime friends and "old tool-ers" across the country.
Two separate memorial services will be held. One will be at Freedom Pointe, 9201 Foster, Overland Park, KS on Friday, Aug. 9th, at 9:30 a.m. A second one will be at the Combs Chapel of Country Club Christian Church, 6101 Ward Parkway, KCMO 64113 at 1:00 p.m. on Saturday, Aug. 10th. Contributions in his memory may be made to the Building Restoration Fund of the church at the address above.
Ivan's family and friends wish to express their deep appreciation to the staff members of Freedom Pointe, Innovative Senior Care Hospice and CareStaf, especially Latisha Hughes, for the loving care that they have provided in making his final years and months a gentle loving experience and to the staff of D.W. Newcomers Overland Park Chapel for their good services.
To order memorial trees or send flowers to the family in memory of Mr. Ivan Risley, please visit our flower store.