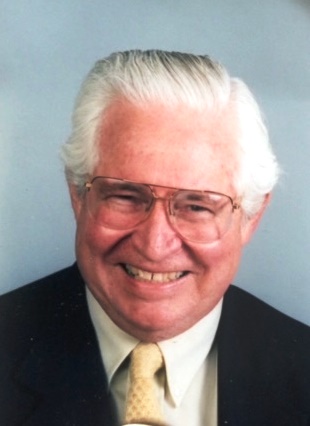 Howard T. Sturdevant, beloved husband; father; step-father; grandfather; uncle; brother and friend, died within the Octave of Christmas, on December 31, 2020, at Seabrook Retirement Community in Tinton Falls, NJ.  He was 86.  Howard courageously fought Parkinson's disease; dementia; COVID; and pneumonia.  The Mass of Christian Burial for Howard will be at his longtime parish Church of St. Ann in Prairie Village, KS on Friday, January 8th at 1:30pm, with Fr. Craig Maxim, Pastor, presiding.  (Social distancing and masks required.)  Burial will follow at Resurrection cemetery in Lenexa, KS.

Howard Taylor Sturdevant was born August 10, 1934 in Ottawa, KS, the older son of Ida Howard and Harold LeRoy Sturdevant.  His father was an engineer with the Kansas Highway Dept., his mother a former school teacher in Lindsborg, KS.   As Howard and little brother Bob grew up, the family moved around the state, in connection with Harold's work, to Ottawa; Garnett; Independence; Sedan; Chanute; Fort Scott.  After graduating from Fort Scott High School, Howard earned a B.A. in History at K.U. in Lawrence in 1956, where he also joined the Phi Delta Theta fraternity.  Before returning to K.U. School of Law to earn an LL.B in 1962, and to be admitted to the Kansas Bar the same year, Howard served in the U.S. Army in Baltimore, MD and in Seoul, Korea.

The mid-1960's found Howard in Kansas City, working as Attorney in the Law Dept. of Gulf Oil Corporation, with duties involving contract, real estate, and personal property matters.  In the late '60's, Howard and his growing family moved to Cleveland, OH, where he served as Counsel for Headquarters Office at Alcan Aluminium Corporation.  This was followed by a stint in Chicago at Spector Freight Systems, as Corporate Attorney.  By 1970, Howard had found a niche in the airline business, which made him most happy.  He became Regional Manager of Property at United Airlines, first in Chicago and then in San Francisco.  During the mid-1970's he lived, first, in Hong Kong, then in Honolulu, representing Pan American World Airways as Director of Property, Far East and Pacific.  From the late '70's until 1982, he resumed work at United Airlines as National Administrator of Airport Affairs, first in New York (although living in New Jersey), then in Chicago.  He re-joined Pan Am at New York's JFK Airport as Administrator in its Properties and Facilities Dept. in 1983, until Pan Am's demise in 1992.

Returning to Kansas City, where he could keep an eye on his elderly parents, who were in decline, Howard decided to transition to real estate sales, where he put his Contract Law and negotiating skills to work, building a very successful new career with Reece & Nichols, specializing in high-rise condominiums on the Country Club Plaza and newly-built Price Brothers developments out south.  Howard had presence, he always stood out as a true gentleman, kind, and, despite never having a bad word to say about anyone, he was most enjoyable to spend time with!

And flights of angels sing thee to thy rest.

In lieu of flowers, a memorial in Howard's name may be made to St. Ann Church, 7231 Mission Rd., Prairie Village, KS 66208. To view the live streaming of the service, please go to: https://stannpv.org/howardsturdevant ,

To order memorial trees or send flowers to the family in memory of Howard Sturdevant, please visit our flower store.