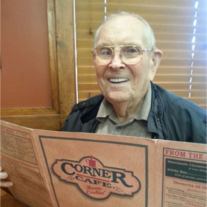 Herbert Wheeler Marselus, 93, passed away on Monday, January 25, 2016 at Overland Park Regional Hospital. He was born on July 14, 1922 in Elwood, Kansas in his grandparent’s house. He is the son of Glenn and Ruth Marselus of Elwood, KS.

Herb attended Elwood School graduating in 1940. His school days were busy with a paper route in Elwood. After graduation, he went to work at the Roubidoux Hotel in St. Joseph, MO. He was there when he heard the news of the attack on Pearl Harbor. He went to Kansas City to attend aircraft mechanics school. He was recruited to work at the bomber plant in Fairfax, where he stayed for 8 months. He enlisted in the Army/Air Corp and was based at Rosecrans Field for basic training. His was transferred to Reno, Nevada for overseas training. He was stationed at Cairo, Egypt and Abadan, Iran. He served as a Staff Sergeant to the base commander in Abadan and fought the war with a typewriter.

Following his military service he went to work for Standard Oil in St. Joseph, MO. In 1947, he attended Central Bible Institute in Springfield, MO, where he met Daisy Belle Mishler. They married in 1949.

They lived in Elwood until moving to Kansas City in 1953. Herb found work as an electrician for Rose Electric Company. In 1960, he became a member of the International Brotherhood of Electrical Workers Local Union 124 in Kansas City. He worked many years for Kansas City Electric as a service truck driver. He retired in 1984.

Herb and his family were members of Evangel Temple Assembly of God in Kansas City until 1963. He then moved to Lenexa, Kansas. There he joined the Overland Park First Assembly of God Church where he served as a Deacon, song leader, Communion coordinator, and Financial Committeeman for many years.

Herb’s service to his country, his Lord, family, friends, co-workers and community gave testimony to his character. He was a blessing to all who knew and associated with him. His patience, kindness and cheerful nature radiated to everyone fortunate enough to be part of his life.

Herb leaves a wealth of goodness in the lives of his family. He is survived by two sons; Reggie, of the home, Randy (Susan) of Overland Park, KS; a sister, Joan Gilbert of Alexandria, Louisiana; two grandchildren, Carrie Beth Lima (James) of Lenexa, KS, and Ben Marselus (Rachel) of Merriam, KS; five great-grandchildren, Levi, Lydia and Lucas Marselus, Ruth and Alexandre Lima.

In lieu of flowers, the family requests that memorial contributions be made to Church Of Hope, 841 Minnesota Ave., Kansas City Kansas 66101.

Your browser does not support this video format. You should be able to view it in Chrome, Safari or Internet Explorer.
To order memorial trees or send flowers to the family in memory of Herbert Marselus, please visit our flower store.