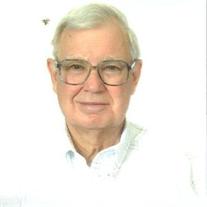 Harry Kupfer Newby, 82, of Lenexa, passed away on October 9, 2013.
Mr. Newby was born June 14, 1931 in Kansas City, MO and lived in the area for most of his life. He attended J.C. Nichols School, Southwest High School, and the University of Kansas. At KU, he was a member of Sigma Phi Epsilon Fraternity and served on its Alumni Board. He was also a member of Delta Sigma Pi Business Fraternity and the University of Kansas swimming Team. Mr. Newby served as a First Lieutenant in the United States Air Force. He was employed by Arthur Young and Co., Hallmark Cards, and from 1963 until his retirement in 1995 by Western Auto Supply Company. He was a member of Countryside Christian Church, the Kansas City Swiss Society, and a trustee of the Corinth Cemetery.
He was preceded in death by his parents, Mayben Procter Newby and Leona Kupfer Newby. He is survived by a brother, Daniel W. Newby of Naperville, IL, and his nephews, John, Michael, and William Newby.
The family will receive friends on Friday, October 11th, 7-9 PM, at D.W. Newcomer's Sons Johnson County Chapel, 11200 Metcalf Ave, Overland Park. A brief prayer service will be held at 7:30 PM.
To order memorial trees or send flowers to the family in memory of Mr. Harry Newby, please visit our flower store.