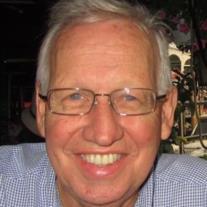 Harold D. Neptune of Prairie Village, Kansas, passed away on June 1, 2015.   Harold grew up in Kansas City and graduated from Southeast High School in 1960.  He attended Purdue University where he received both a BS in chemical engineering and a MSIA from the Krannert School of Management.  Perhaps more importantly, he met Carolyn Fruit Neptune at Purdue. The two married in 1965, and they had a deep partnership which was a blessing to them and those around them.  Carolyn’s passing in 2014 was a profound loss for Harold, but he continued to express joy and live life fully while pursuing activities and adventures as they had always done.
During Harold’s career, he held operations management roles in several companies ranging from Hallmark Cards to TWA to Robbie Manufacturing and American Ingredients. In each role, he brought logic and discipline as well as good humor and insight to any problem.  His retirement in 2005 allowed him more time to spend with his passions.
Harold loved to garden, a joy he learned from his parents, George and Stella Neptune.  At one time, his garden contained over 25 different fruits and vegetables, in addition to dozens of varieties of flowers.  In recent years, Harold worked actively with the Master Gardeners organization to share his love of gardening with grade-schoolers and adults alike.
Harold and Carolyn also loved to travel and did so extensively.  The log he kept of just their post-retirement trips had 133 entries.   Some of their favorite adventures included trips to Asia and Australia, cruising the Panama Canal and the Baltic Sea, and a trip through Alaska with their extended family.
Harold was an active member of the Christian Science church, serving as reader and board member.  He also worked extensively with the Principle Foundation, spending more than 20 years on the board and serving as President for 3 of those.
Family was dearly important to Harold.  He and Carolyn frequently visited Boston to see their daughter, Jill Bicks, her husband Ned and their children Will and Kate, as well as Denver to see their son Steve Neptune, his wife Lydia and their children Peter and Matthew.  Houston was also a frequent destination to see Carolyn’s late brother, Bill Fruit, and his wife Jane.  Harold’s sister Helen Yeomans lives in Kansas City, meaning visits with her and her husband Ron, their children and their grandchildren were at least a monthly event.  Harold managed to make many friends – of all ages – feel like family thanks to his warmth, booming laugh, and genuine interest in others.  Many friends have commented that he and Carolyn were ‘second parents’ to them.
In accordance with Harold’s wishes, no services will be held.  Contributions in his memory are suggested to either the Principle Foundation (principlefoundation.org) or to the Master Gardeners via the Kansas State Research and Extension Master Gardeners, Johnson County located at 11811 S. Sunset Drive, Suite 1500, Olathe KS 66061-7057.   Please offer condolences at www.overlandparkchapel.com.

To order memorial trees or send flowers to the family in memory of Harold Neptune, please visit our flower store.