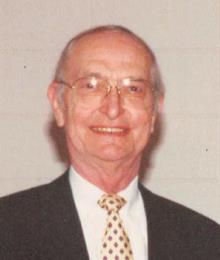 Harold L. Kirk, “Dusty”, was born December 24, 1928 in McCune, Kansas to Glenn and Bertha Painter Kirk.  He attended McCune Kansas Elementary and Rural McCune High School and was a member of McCune Methodist Church.  He received his B.S. in Commerce and Industry at Kansas State Teacher’s College, now Pittsburg State University, in 1951.  He married Dorothy Arlene Bates (Ft. Scott) in 1951 at Ft. Holabird, Maryland where he became a special agent in the U.S. Army Counter Intelligence Corps from 1951 to 1952, E-5 Sargent.  After his discharge, they returned to McCune where he worked in the family business, McCune Tire & Appliance Shop, before moving to Ft. Scott, Kansas.

Dusty always said “I want to make a difference and help people”.  He worked in several charity projects, his way of paying his “civic rent”, such as ringing bells for Salvation Army and building Habitats for Humanity with Arlene.  In his later years, to show his patriotic commitment, he assisted a journalist in obtaining interviews with WW II and Korean veterans.  Recently, the Quilts of Valor Foundation presented him with a quilt in honor of his Korean War service.  The U.S. flag flew every day at his house.  Dusty loved old cars and kept a list of every car he owned and could tell you the model and year of almost any car he saw.

He was very proud of his family.  His wife of fifty-two years, Arlene, was a teacher and trust attorney and retired President of Great Plains Trust Co.  She preceded him in death in 2003.  He is survived by his daughter, Lucinda Totten, of Clinton, IA (John), daughter Anna Allen, of Leawood, KS (John), and son, H.L. Kirk II, of Salem, OR (Maryann), brother, Lloyd Kirk, of Mission, KS, four grandchildren, and eight great grandchildren and many cousins.  His younger brother, Frances, preceded him in death.

To order memorial trees or send flowers to the family in memory of Harold Kirk, please visit our flower store.